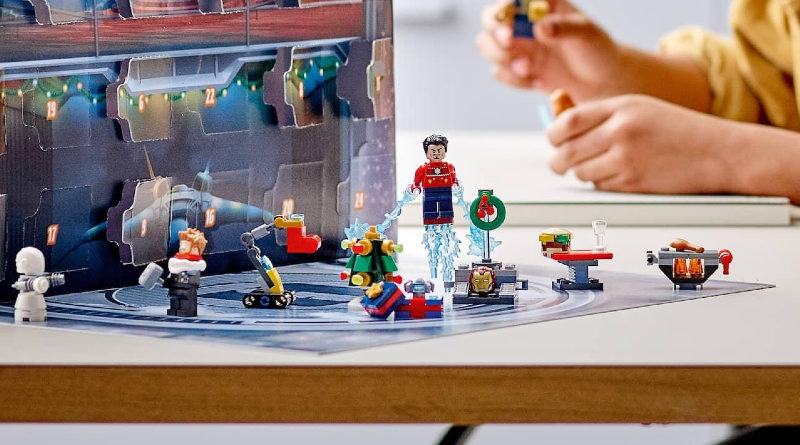 Although there’s plenty of new bits and pieces to find, there are also a few miniaturised versions of existing LEGO Marvel sets in 76196 The Avengers Advent Calendar.

Be warned: spoilers ahead for what’s to come in 76196 The Avengers Advent Calendar, so if you want a festive surprise, click away now.

With some exclusive minifigures and an apparent Christmassy truce between Thanos and the Avengers, there’s a lot to take in the official images now available of the calendar. However, we’ve also spotted some adorably tiny versions of existing sets tucked behind the windows.

First up, there’s a festive version of Dum-E, the lovably inconsistent robot arm that comes in full-size in the retired 76105 The Hulkbuster: Ultron Edition. To make it extra-Christmassy, the robotic assistant has a red stocking instead of its usual grabber. It also looks like there’s a tiny version of the Hulkbuster itself to go with it.

Next, there’s of course a pocket-size creation of the Avenger’s Tower, a la 76166 Avengers Tower Battle. And you’re never going to find Thanos without his infinity gauntlet, a minute copy of the much more detailed 76191 Infinity Gauntlet. Each stone also comes with its own pulse of light as well, so you can act out a battle over the turkey.

The small hall of Iron Man armour shares a similar design to both 76125 Iron Man Hall of Armor (review) and the retired 76167 Iron Man Armoury. The whole calendar has a definite Iron Man-theme, being set in the Avenger’s Tower, built by Tony Stark himself.

Finally, the now-retired 76126 Avengers Ultimate Quinjet can be spotted downsized into a smaller replica, complete with jets out the back. Like this one, many of the sets that have been miniaturised in 76196 The Avengers Advent Calendar are no longer in circulation, so this is a great opportunity to add at least some version of them to your collection.

The calendar will go on sale in September, but we’re still waiting on details about the price. As ever, you’ll be the first to know when we get the information confirmed.