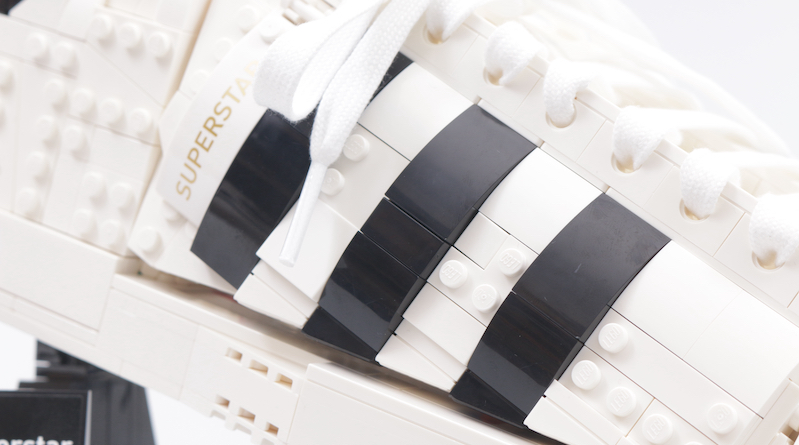 Less than a year into Adidas and the LEGO Group’s collaboration comes the first brick-built LEGO trainer, 10282 Adidas Originals Superstar. Is it a cool classic or a quick cash-grab?

That is simply to say that there is a distinction between what it could be as a quality customer experience, and all that it needs to be in order to sell units.

Importantly, for what could have been merely a quick demonstration of the selling power of both Adidas and LEGO, 10282 Adidas Originals Superstar is in fact a credible and detailed LEGO set, created in tribute to one of the world’s most iconic trainers. And if you’re going to get a LEGO set based on a shoe, that’s what you’d want.

A lot of what will appeal to anyone picking up 10282 Adidas Originals Superstar lies in its novelty. There has never been a 1:1 scale LEGO shoe before, and from the packaging through to the build experience and final product, everything represents a first for the LEGO Group and, in turn, for LEGO fans.

Novelty will take 10282 Adidas Originals Superstar far, as it genuinely makes for a new, unique and interesting LEGO experience. Included throughout that experience are some clever techniques and build ideas that deliver on the expectation some may carry into any LEGO set labelled 18+. Where something like 10292 The Friends Apartments prioritised references over complexity and could have easily been labelled a 12+ LEGO set, 10282 Adidas Originals Superstar carries a bit more sophistication and challenges the builder a little better.

With only 731 pieces, it may not be the longest build process, but right from the very first five pieces you put together, you are invested in an engaging construction process that starts from the sole of the trainer and works up to completion with the real lace included.

And upon completion, one of the most noticeable aspects will be that real shoelace. Given the LEGO Group’s pride in almost always finding a brick solution to any build problem, it’s somewhat unexpected and does take a bit of adjusting to. But it’s also not a bad thing, offering a clever bridge between the real-life trainer and the LEGO version that any brick-based approach would likely have interrupted as much as tried to replicate.

Most pressingly, though, that touch of realism doesn’t guide the set too far away from the LEGO experience. Perhaps with a higher budget, or with a few more uniquely-moulded parts, the LEGO Group could have perfectly recreated the Superstar out of bricks, to the extent that you would not be able to tell it apart from the real thing, at least until you picked it up or tried it on. And indeed, the design team has revealed to Brick Fanatics that such an approach was considered, just as something quite the opposite was also tested.

Instead, the LEGO Group has struck a balance with 10282 Adidas Originals Superstar that takes something so iconic and well-known as this particular trainer and places it very much in the LEGO medium. It’s an approach that means that, whilst at no stage are you detached from knowing what you are building and holding in your hands is a LEGO set (for instance, the visible studs on the outside are a design choice), the details included throughout the model – both large and subtle – create an authenticity to it that captures everything recognisable to the trainer.

That authenticity begins with the packaging (which is so good we had to write a separate feature on it) and continues throughout the LEGO set inside. The important and most identifiable traits to the shoe are instantly recognisable in brick form, starting most obviously with the overall proportions that help recreate the side and front profiles of the trainer, through to the thickness of the sole, the shaping of the domed ‘shell-toe’ front and the colour and placement of the Adidas and Superstar logos.

Likewise, there are things in the model that didn’t need to be built in but that just add a final layer of immersion, such as the logo being included on the inside of the sole, or how the tongue opens up just as the real thing does. The designers have even included additional pieces and instructions (online) for how to build the left shoe, if you would prefer that to the right shoe that the printed instructions put together (or want to combine two sets for a complete pair).

There’s so much that the LEGO Group and Adidas didn’t have to do or even think about in creating 10282 Adidas Originals Superstar but that they have, and with great effect. We didn’t expect to like this LEGO set, yet it’s hard to fault for what it achieves – a unique LEGO experience recreating an iconic Adidas product, taking everything so well-loved about the source material and applying it with fun and ingenuity to the LEGO medium.

10282 Adidas Originals Superstar doesn’t take the longest time to build, nor is the largest LEGO set in the Creator Expert/18+ range, and a price of £79.99 / $79.99 / €89.99 reflects that. For the novelty value that comes with the set and for the strong appeal it will have with particular LEGO fans and sneakerheads alike, it’s a more than fair price, all things considered.

There’s plenty to enjoy and appreciate to 10282 Adidas Originals Superstar and a lot of it comes from simply how unique it is. There’s so much that makes this LEGO set so completely different to anything that has come before, both as a LEGO model and in the design world of trainers, and that is primarily thanks to the extra level of detail that has been worked into it.

What could have been a cynical, one-and-done ‘limited edition’ product is instead an immersive, fun and intuitive LEGO set. For the more mature LEGO fan, for the sneakerhead or for anyone in between, there’s something about 10282 Adidas Originals Superstar that demands your attention.

Support the work that Brick Fanatics does by purchasing your LEGO Adidas trainers through one of our affiliate links.

How long does it take to build LEGO 10282 Adidas Originals Superstar?

There are six stages to build LEGO 10282 Adidas Originals Superstar that combined take about one hour to complete.

How many pieces are in LEGO 10282 Adidas Originals Superstar?

How much does LEGO 10282 Adidas Originals Superstar cost?