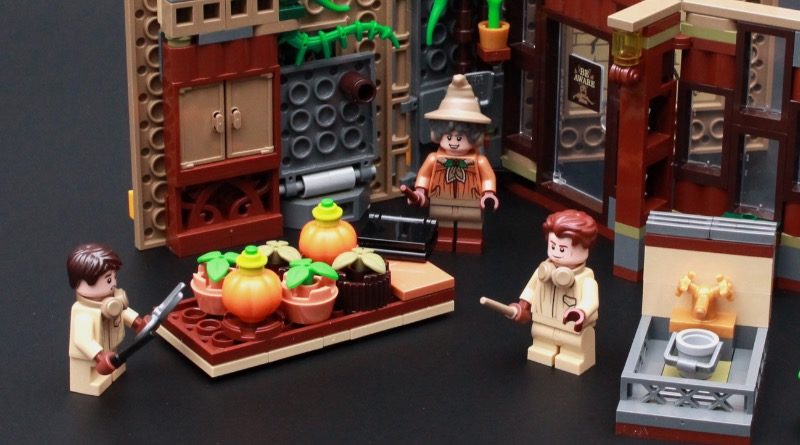 76384 Hogwarts Moment: Herbology Class plants its roots in more promising soil for this year’s LEGO Harry Potter range, blossoming into one of its best buildable books.

After three years of updating and extending Harry Potter’s core product line from its original (intermittent) 10-year run, the LEGO design team has brought something brand new to the table for 2021 in its line-up of Hogwarts Moments.

Despite their apparent similarity, it’s testament to each of the Hogwarts Moment sets that their builds are surprisingly different from one to the next. The core book cover assembly is essentially identical throughout, but the bulk of the build concentrates on what’s inside each one – and that’s where the designers have taken the opportunity to keep things fresh for those Potterheads who just have to catch ‘em all.

76384 Hogwarts Moment: Herbology Class is easily the most thematic of the four, leaning heavily into its eponymous lesson with pumpkins, plant life and a wall structure that imitates a greenhouse, while the vegetable patch is also the best use of the interior topper across the four books. (It definitely beats 76383 Hogwarts Moment: Potions Class’s ‘table’, which didn’t really bother trying to do anything interesting with the collection of 2×2 jumper plates.)

That thematic design also lends itself well to the narrative-driven play that’s baked into this entire subtheme, which is otherwise devoid of functions. The outdoor tap, folding table, cabinet, plants and potted Mandrakes are perfect story starters for the three included characters, and feel more harmonious than (for example) 76383 Hogwarts Moment: Potions Class’s random armchair.

If there’s an obvious criticism to be made, it’s that a handful of plant vines aren’t really enough to properly communicate just how teeming with life Hogwarts’ greenhouses are. And if there’s a second, even more obvious criticism to be made, it’s – as you’ll already know if you’ve read our other Hogwarts Moment reviews – the overreliance on stickers, which is actually where much of the greenery comes from.

As with all these sets, though, the real beauty is how everything packs away inside to allow the book to be closed. The thought that’s gone into making sure everything folds away neatly to form the book’s ‘pages’ never gets old, no matter if you’ve built one, two, three or all the Hogwarts Moment sets – and the play potential opened up by that portability is second to none, particularly in a set with so many otherwise disparate assemblies.

Finally, we can’t help but at least touch on the same niggle we’ve had across this entire range: the muted colours are fine, but we’d still have preferred hues that matched the books’ corresponding houses. Bright yellow here would have been way more eye-catching, even if the earthy tones of dark tan do feel strangely suitable.

Like its fellow buildable books, 76384 Hogwarts Moment: Herbology Class includes three minifigures: a relevant professor, a Gryffindor pupil and a house-specific pupil, which in this case is Cedric Diggory. We’ve had a few different Cedrics over the past couple of years, but this is the first time we’ve seen him in this outfit.

Neville Longbottom represents Gryffindor (every Hogwarts Moment includes at least one pupil from Harry Potter’s house), updating the same variant first included in 71022 Harry Potter and Fantastic Beasts Collectible Minifigures. He’s not the most earth-shattering minifigure around, but his scene-specific double-sided head print is welcome.

Just as Professor McGonagall steals the show in 76382 Hogwarts Moment: Transfiguration Class, though, it’s really Professor Sprout who comes out on top in this trio. She uses the same hat and hairpiece combo from last year’s 71028 Harry Potter Series 2, but everything else is new – including those brilliant dual-moulded legs. (We’ll never not praise dual-moulded legs, because every minifigure looks better with them.)

This is the smallest Hogwarts Moment by piece count, but it’s not really worth comparing them against each other: when they’re sat side by side, they all feel roughly the same value. The real question is whether that value is good or poor, and the answer – probably disappointingly – is ‘somewhere in between’.

You can see where the cost of that £27.99 / $29.99 / $29.99 has gone (those huge book cover elements aren’t going to pay for themselves), but as we’ve noted in our previous two Hogwarts Moment reviews, an extra minifigure would have made it an easier price to swallow – particularly given the diminutive size of the finished model.

Across four sets that are – on the whole – difficult to separate, 76384 Hogwarts Moment: Herbology Class stands just a Mandrake’s head above the rest. The mini-builds packed inside feel cohesive and appropriate, the minifigures are generally all strong additions to a wider Harry Potter collection, and even if you’ve already built any or all of the rest of these sets, you’ll still marvel at how everything collapses away to fold the book shut.

Otherwise, it shares generally the same flaws as the rest of this range: the price feels a little high, and there are just too many stickers. But if you only buy one of the Hogwarts Moment sets, this is probably your best bet.

How long does it take to build 76384 Hogwarts Moment: Herbology Class?

You’ll need to set aside roughly 45 minutes to build 76384 Hogwarts Moment: Herbology Class, which is on a par with the rest of the Hogwarts Moment line-up. Just make sure you have a steady hand for those stickers…

How many pieces are in 76384 Hogwarts Moment: Herbology Class?

76384 Hogwarts Moment: Herbology Class is comprised of 233 pieces, the fewest of any Hogwarts Moment – but it doesn’t feel particularly poor value compared to the others, and it arguably has the best minifigures of all four sets.

How much does 76384 Hogwarts Moment: Herbology Class cost?