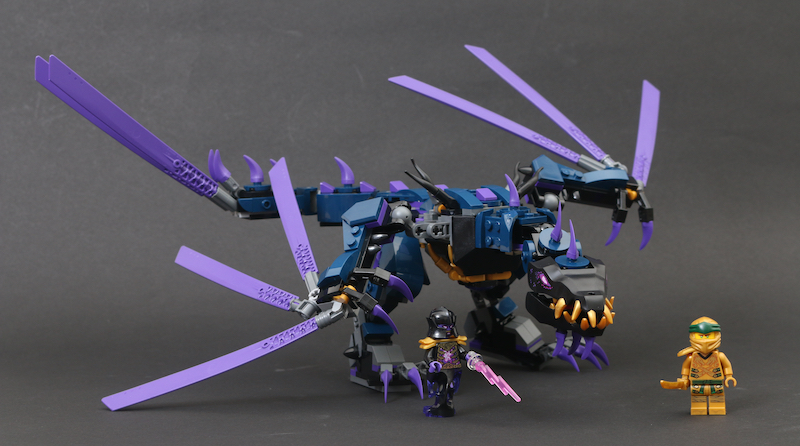 Sets in the NINJAGO Legacy line don’t always have to be based on a previous model, as 71742 Overlord Dragon demonstrates with interest.

Following on from mid-2019’s 70680 Monastery Training comes 71742 Overlord Dragon, the second set so far within the LEGO NINJAGO Legacy line to not be based on a previous model.

Whilst 70680 very much resembled The LEGO NINJAGO Movie’s 70606 Spinjitzu Training, its story actually took inspiration from Season 1 of the NINJAGO television series to depict Kai and Nya in training. Similarly, 71742 Overlord Dragon is based around story elements from Season 2, taking the lead villain and creator of the Stone Army – the Overlord – and for the first time offering him in his dragon form.

That this is the first appearance of the Overlord in dragon form makes 71742 Overlord Dragon long-awaited, given his appearance in Season 2 of the NINJAGO show, which this set is based on, was way back in 2012.

Indeed, that length of time demonstrates that whilst there’s no previous version of this set to compare 71742 to, such have been the improvements in animation of the show – and in LEGO design – over the years that arguably the design of the LEGO set is far more aesthetically pleasing and thematically complete than the dark purple and black beast we saw on screen eight or nine years ago.

By this stage, most NINJAGO fans will know the drill. The LEGO Group pretty much perfected the art of designing LEGO dragons a few years back, and ever since has just been showing off with increasingly clever ideas for various parts of the creature’s anatomy. It means that you can pick up almost any NINJAGO dragon that is released today and have a highly articulated, wonderfully coloured and incredibly animated model to play with.

71742 Overlord Dragon is no different, benefitting from a unique colour scheme to boot. Perhaps as a nod to NINJAGO’s early years, the Legacy sets have generally had dragons with heads made from two moulded pieces, rather than built out of bricks. Depending on which side of the fence you fall on, the differences between brick-built and moulded heads may determine your opinion on 71742 Overlord Dragon and its own moulded head design. It’s not a jarring effect, though, and with the printed eyes, gold teeth and jagged shaping, it has a sinister look that transitions very nicely into the long neck and body. This thing is creepy, and that’s just right.

Two minifigures are included, of course beginning with the Overlord himself, this time in ‘human’ form. If we’re getting the character in dragon form, where better than to include this version too? He has Golden Lloyd to face off against, with this version of the ninja different to the Golden Lloyd that appears in another 2021 set, 71735 Tournament of Elements.

Both are as you can expect 2021 minifigures from NINJAGO to be designed – full of detail and expression true to the characters’ appearances on the show.

For the price, this is a pretty large dragon, both in height and length. It also marks the first appearance in dragon form of a key antagonist from Season 2 and more than does the source material justice. The one area where at £24.99 you would expect a greater level of detail, though, is in the wings. Large purple plastic pieces are splayed out to represent them and for the most part fit the overall aesthetic, but black plastic with purple material could have really completed this version of the character’s first-ever visualisation in brick form.

It means that where 71742 Overlord Dragon impresses on size and articulation, the final design feels more like a £17.99 dragon than one at £24.99. That this is a long-awaited dragon, though, may just tip the scales in favour of picking it up anyway.

71742 Overlord Dragon took almost nine years to get to us, and thankfully the wait has produced a set that more than does the character justice. An eye-catching colour scheme, a long and tall body and decent wingspan are all reasons to overlook the rather lightweight nature of the wing design, as is the fact this is the first time we are getting the Overlord in what is described in the show as the character’s true, original form.

A rarity within the NINJAGO Legacy line for being completely original, 71742 Overlord Dragon is ultimately going to end up a must-have for collectors, and for good reason.

LEGO NINJAGO Legacy 71742 Overlord Dragon is available at LEGO.com from January 1, 2021 – support the work that Brick Fanatics does by purchasing your LEGO through one of our affiliate links.