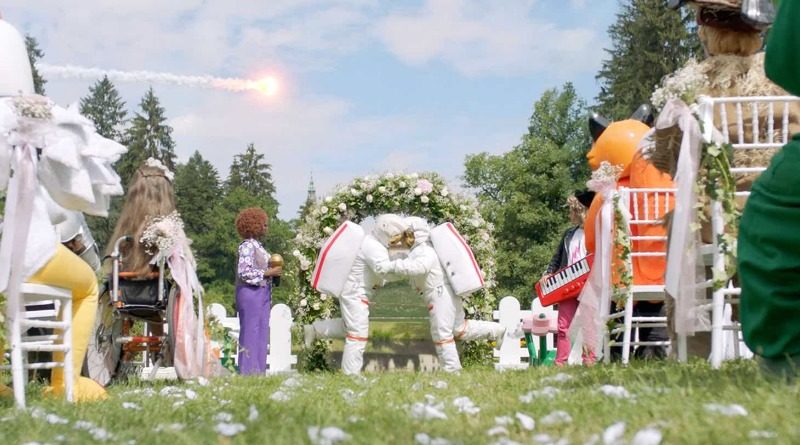 The LEGO Group is already getting in the festive spirit with its latest Rebuild the World video.

The company launched its new marketing initiative last year with a big-budget, live-action ad. For much of this year, though, things had gone quiet – until September, when the LEGO Group relaunched Rebuild the World with a slightly tweaked version of its original video.

The campaign is now in full throttle, as the company has joined the long list of brands with big-budget holiday ads. The latest Rebuild the World video combines the wide portfolio of LEGO themes in live action, from Collectible Minifigures and NINJAGO to Castle and Star Wars.

Two astronauts marry in the presence of a dinosaur and a giant chicken; an AT-AT stomps through a city before taking an impromptu nap; and the NINJAGO crew whips out enormous 3D-printed LEGO weapons. Like last year’s video, it’s all about applying imagination and creativity to the existing line-up of LEGO products. And it’s all set to a bespoke reimagining of “What a Wonderful World”, recorded with the City of Prague Philharmonic Orchestra.

You can check out the full clip below, via the LEGO YouTube channel.

The LEGO Agency is responsible for the campaign, which includes not only the video above, but a collection of specially-curated Spotify playlists designed for families to listen to while building. There’s an adrenaline-fuelled mix for assembling action-packed sets and vehicles, for instance, and a list of Star Wars-themed tunes for building in a galaxy far, far away. None of these playlists appear to be live on Spotify just yet, though.

“Our new campaign is a celebration of the creative power and optimism that children possess,” says the LEGO Group’s Chief Marketing Officer, Julia Goldin. “We’ve seen so many families building together this year, giving parents a chance to experience and appreciate how children can build, unbuild and rebuild the world around them using LEGO bricks. We want to inspire people of all ages to play and unleash their creativity this holiday season.”