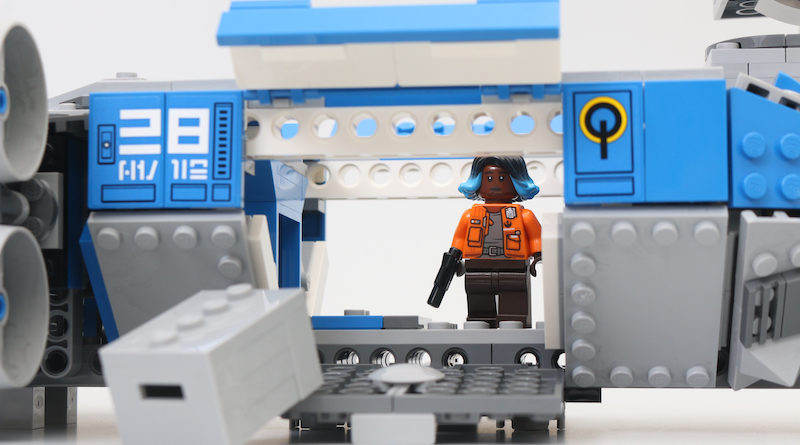 75293 Resistance I-TS Transport has an unusual spot within the LEGO Star Wars line, but it shouldn’t necessarily be overlooked.

Part of what keeps everyone invested in LEGO Star Wars even 21 years into its existence is in its openness to innovate and to try new opportunities both creatively and in source material. And whilst releasing a LEGO set based on a theme park ride – a product based on a product – can rightfully be looked upon with cynical eyes, it also makes for a highly interesting and genuinely new LEGO Star Wars set.

So, based on a theme park ride at the Star Wars Galaxy’s Edge area in Disneyland, California and Disney World, Orlando, comes 75293 Resistance I-TS Transport. Tied into the most recent sequel trilogy era, the set thematically has a place within the galaxy far, far away, but one that few other LEGO Star Wars sets would share. It may have appeared in that shot towards the end of The Rise of Skywalker, as did almost every other ship Disney could fit in there, but we’re not going to watch that film again just to find out… Otherwise, it’s a Resistance ship set for a different route into people’s creative space, and for the divisive nature of the sequel trilogy, that’s no bad thing.

Galaxy’s Edge as a theme park area is not only based on – and set within – Star Wars, but it aims to introduce new elements to the galaxy, through its existence as a location, the new characters and ships that may visit that location, and the rides that it offers. Within that, 75293 Resistance I-TS Transport is based on a full-scale ship that features during an early part of the Rise of the Resistance ride.

The ship almost serves a bus-like function both in the ride and the wider Star Wars universe that it is based within, and as such, the LEGO set really comes across the same way. A cockpit at the front and a reasonably-sized cargo hold to fit a few minifigures within, and limited weaponry around the outside of the vehicle.

For the boxy appearance of the ship, though, there are subtle details to its design that are expertly captured within the LEGO model that make for a surprisingly focused build process. The ‘head’ to the transporter is far more solid than you may initially expect, whilst the opening function to access the cockpit is stylishly achieved, likewise how the angled bodywork along the exterior is put together.

The central area is accessible through two panels that swing open – in a particular order – and through lifting off the entire roof for play access. Much like similar transport-based Star Wars vehicles of recent years – 75151 Clone Turbo Tank most immediately comes to mind in comparison here – the designers have prioritised the style and form of the vehicle over the space available for play, storage and minifigures within.

It’s not a huge criticism, but worth noting that expectations may need to be tempered, for how many minifigures you will be able to fit inside 75293 Resistance I-TS Transport without some personal modification.

The back-end of the transporter is a good third to the entire build, making for a more than satisfyingly-sized collection of engines reminiscent of sister ships such as the Tantive IV and the U-wing. And it’s details like that and how they have been expertly captured in the LEGO model that help to give this set identity and legitimacy in any LEGO Star Wars collection, even if its source material isn’t as creatively authentic.

You meet Mon Calamari character Lieutenant Bek during the ride on the I-TS Transport, whilst in the queue for the attraction are GNK droids that power the lights. During a later segment of the ride, whilst on board a Star Destroyer, you sit on a First Order Fleet Transport piloted by a black R-5 astromech droid.

All three directly feature during the Rise of Resistance ride at Galaxy’s Edge Disneyland, California and Disney World, Orlando, whilst Vi Moradi – a character developed in the Star Wars comics – is a Resistance spy who you encounter randomly whilst walking around the theme park.

As a quartet they are all easily identifiable from and tied to Galaxy’s Edge and three specifically to the Rise of Resistance ride and the I-TS Transport, and it helps to ground the entire set within that setting and location. For the attraction of the theme park area, the immersive experience it tries to offer and the new characters and ships that it introduces, to have four characters only seen within that environment included in 75293 Resistance I-TS Transport adds real value to the LEGO set.

The two minifigures’ designs are also importantly authentic to their source material and at home within the wider sequel trilogy assortment of characters most LEGO Star Wars collections will currently have.

Coming in at £89.99, 75293 Resistance I-TS Transport is the joint fifth most expensive LEGO Star Wars set released so far in 2020, and the four ahead of it – 75290 Mos Eisley Cantina, 75275 A-wing Starfighter, 75288 AT-AT and 75292 The Razor Crest/Mandalorian Bounty Hunter Transport – all notably live up to their higher price tags as exceptional LEGO Star Wars sets.

75293 Resistance I-TS Transport doesn’t quite compare in the same way and a couple of years from now won’t hold the same iconic status as any of the more expensive quartet from this year, but, for what you get at this price, there’s plenty to appreciate and admire within the model. What’s interesting to consider, though, is its longevity – it’s a space bus and not much more than that – whilst the included characters are vague at best. At the same time, though, it’s a faithful recreation of a specific, canon, non-film Star Wars ship, which all suggests rarity and future collectability (and regret, for those who doesn’t pick it up whilst on shelves).

As its own thing, 75293 Resistance I-TS Transport isn’t the most exciting Star Wars vehicle to be put into LEGO – this year or ever – but, the build is fantastically accurate and certainly one-of-a-kind for a few reasons. There’s little to objectively fault about it, nor criticise in that regard for the price it comes in at.

That is perhaps, though, beyond the potential to have included an additional minifigure or two. The next highest priced LEGO Star Wars set out this year with just two minifigures is the £74.99 75286 General Grievous’s Starfighter, which is being slammed for the lack of value it offers. The next most expensive one after that with two minifigures is 75283 Armored Assualt Tank (AAT), which even at £34.99 drew our comment for being too highly priced for having just two minifigures.

Details right across the ship give 75293 Resistance I-TS Transport real purpose and belonging within the LEGO Star Wars range. For the cynical nature of the set’s existence, you could forgive the design team for spending a little less time developing this set. However, for their attention to the finer points that make the transporter an intriguing and interesting addition to the Star Wars universe, the same can be said of the LEGO model.

The minifigures are a fine addition too, and a great selection for this particular set, albeit rather light in number. That may mean that overall the set comes in a little pricey, but even so 75293 Resistance I-TS Transport is a smart mid-size set worthy of adding to the LEGO Star Wars collection.

Did you know that you can directly support the work that Brick Fanatics does by purchasing your LEGO through one of our affiliate links, like this one? Click through to buy and we receive a small percentage, which goes towards funding such website content as this.