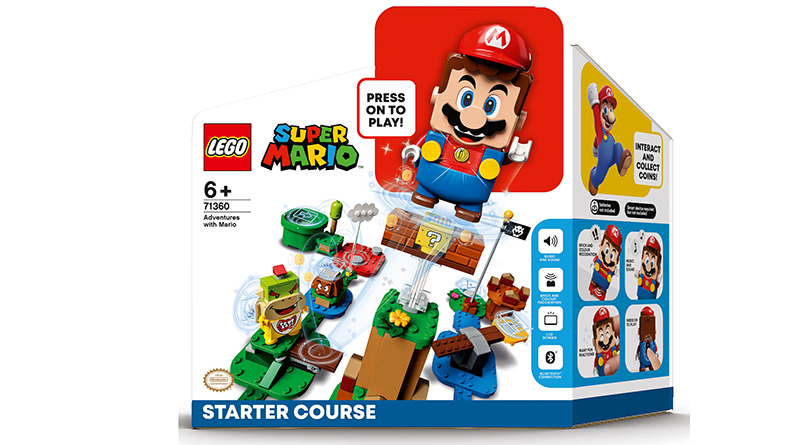 Fans can get a look at the main set in LEGO Super Mario 71360 Adventures with Mario now, with new images sgared of the starter set.

LEGO Super Mario 71360 Adventures with Mario has gone up for pre-order at LEGO.com, with the retailer sharing new images including one of the set’s box. Priced at £49.99 in the UK, it will be released on August 1.

The 231 piece starter set is required to use any of the other sets in the LEGO Super Mario theme. It includes seven action bricks that cause different reactions from the Mario figure. The character can collect virtual coins and display such actions using an LCD screen on his chest.

Let’s-a-go! Enjoy hours of endless fun and bring Super Mario to life with the LEGO Super Mario Adventures with Mario Starter Course! This LEGO set is jam-packed with interactive features and iconic Super Mario pieces that will create a new physical play experience to the classic video game.

This incredible set was created in partnership with Nintendo, and was developed to enhance play experiences, offer unlimited challenges and encourage the development of problem-solving skills. The LEGO building experience has been totally reimagined, and this set will introduce a whole new way to play combining video games and traditional LEGO brick sets.

As part of the LEGO Super Mario line, this set will delight LEGO fans ages six and over. The set features a LEGO Mario figure that gives instant and expressive responses via the LCD screen and speaker.

Earn virtual coins by moving LEGO Mario from the Start Pipe to the Goal Pole via the ? Block, spinning and cloud platforms, and engage in super battles with the Goomba and Bowser Jr. toy figures. Rearrange the bricks to create your own levels and let your imagination run wild!