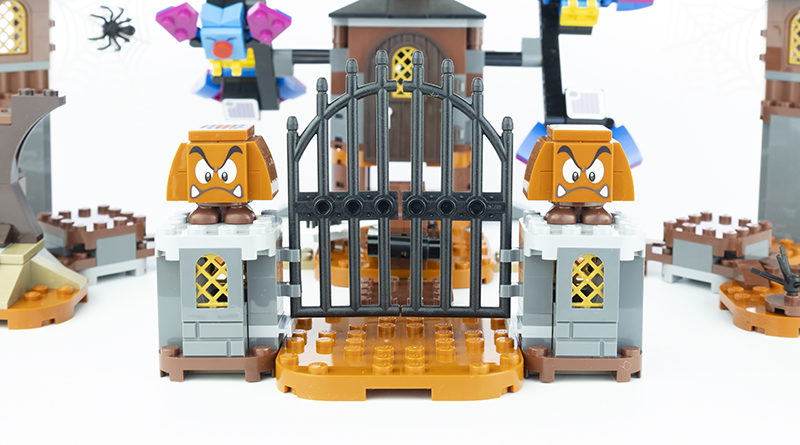 71377 King Boo and the Haunted Yard Expansion Set offers a boss battle for Mario, including the spooky King Boo. The villain towers over a graveyard that features spiders, webs, Swoops and Goombas.

Fans will need 71360 Adventures with Mario Starter Course (review) to be able to build and interact with this set.

71377 King Boo and the Haunted Yard Expansion Set is one of the best-looking sets in the Super Mario theme, offering a decent display model as well as the gaming aspect. It works so well because visually it all ties together, with the browns and greys giving it the graveyard feel it intended to evoke. 71369 Bowser’s Castle Boss Battle Expansion Set (review) achieves a similar cohesiveness that is lacking in some of the smaller sets full of greens, reds and blues.

The gates are a nice starting point to the build and look good, with imposing towers either side of the black doors. Popping the Goombas either side adds to the look of this section. Beyond that, the set follows the typical LEGO Super Mario way of building basic structures connecting platforms, until it comes to the main event.

King Boo’s building is essentially a frame, but a mechanism contained within allows four Swoops to be attached to the side of the structure on spinning Technic elements. It looks nice, if a bit wacky, when complete – but that is about right for this universe.

The gameplay follows the tried and tested pattern of Mario jumping on villains and activating levers, with an impressive mechanism included in this particular set. To get the basic ones out of the way though, the first is literally knocking over a tree, to find a coin beneath. A lever flips over a spiders web to reveal another beneath it.

Defeating King Boo though is a bit more impressive. As a boss battle, the designers have put some real thought into it. First, Mario must leap onto the back of the Swoops to defeat them. As he hits and spins them, they cause King Boo to lift higher from the building, until he falls out and Mario can defeat him by jumping on his underside – after leaping on the Star Power crate revealed, for extra points.

The only issue is that it is hard not to send the whole structure toppling and sliding. With a 60 second timer on the go, there is no time to patiently tap Mario on the Swoops, so while hitting him on them, the structure wobbles. Try putting a hand on it? No, because that gets in the way of the swirling swoops. The mechanism is really good, it’s just a shame there is not more weight to the bottom of the building to keep it in place.

As with so very many sets in the theme, the issue is price. Is that impressive mechanism worth £44.99? No, it isn’t.

The Swoops are well designed, with the angled 2×2 plate serving perfectly as the wings. King Boo is exactly what he needs to be, a big white square. Goombas pop up again here too and look wonderfully grumpy.

71377 King Boo and the Haunted Yard Expansion Set is a good set in the theme, with a nice central mechanism and visually offering more than most. Those who are committed to collecting this theme will be doing so knowing that the value isn’t great, for most though, the price tag will put them off this set.

71377 King Boo and the Haunted Yard Expansion Set will be available from August 1 at LEGO.com. You can help support Brick Fanatics’ work by using our affiliate links.