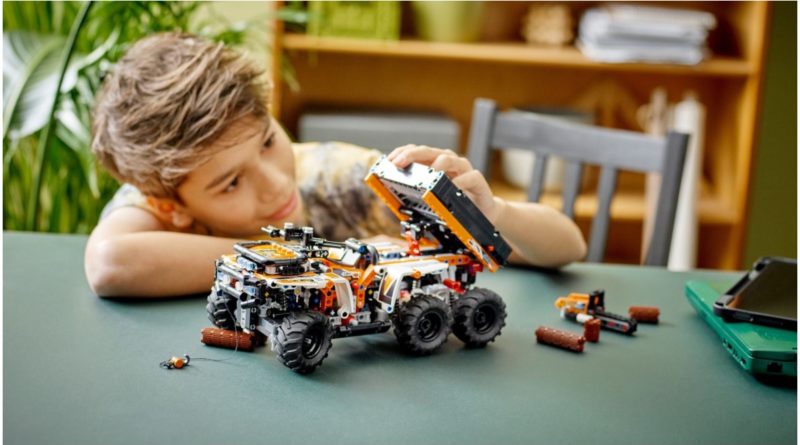 They thought we wouldn’t notice, but we did: the box art for LEGO Technic 42139 All-Terrain Vehicle includes an error that we really hope isn’t deliberate.

42139 All-Terrain Vehicle launched on March 1, depicting an off-roader at a relatively new scale for Technic. But while it seems like an inoffensive, mid-weight build at first glance, an inaccuracy in the 764-piece set’s box art suggests the LEGO Group either needs to improve its proofing process, or is deliberately trying to hide the visual disharmony created by a colour-locked element.

As can be seen from either the set’s lifestyle images or our own review photos, the rear end of the ATV’s black and orange tipper body is broken up by a glaring red Axle 1L with Pin 2L with Friction Ridges, which juts out from the side of the build and interrupts the otherwise smooth design. That’s an unfortunate consequence of the LEGO Group keeping certain Technic elements locked to specific colours, in order to simplify the build process.

You wouldn’t know it was there from looking at the box art, though: across the packaging and official product images for 42139 All-Terrain Vehicle, that same piece is mysteriously recoloured to black, allowing it to blend in with the rest of the tipper body’s upper level. The question now is: was this a deliberate attempt to disguise the red axle with pin, or was it simply a mistake overlooked during the production process?

It wouldn’t be the first time in recent memory LEGO packaging has included an error – sets like 75309 Republic Gunship, 75324 Dark Trooper Attack and 11021 90 Years of Play have all arrived on shelves with mistakes in their box art, to be rectified in future print runs.

In that regard, it’s easy to give the LEGO Group the benefit of the doubt – particularly as the designers may have access to non-colour-locked versions of those pieces, and could therefore have used one to build the copy of 42139 All-Terrain Vehicle used for product shots, simply forgetting to switch it out before photography took place. That’s only if a black axle with pin exists anywhere in the world (or more specifically, in Billund), though.

If it doesn’t – and it’s hard to imagine why the LEGO Group would manufacture a particular colour of an element like that solely for internal use – the only other conclusion we can arrive at is that the box art for 42139 All-Terrain Vehicle is deliberately misleading. What’s more puzzling is that the element in question isn’t actually locked to red: it’s also available in dark grey, and was used in that colour as recently as November 2021, in 75313 AT-AT.

A dark grey axle with pin would surely have done a better job of blending into the ATV’s bodywork than the red one. Instead, we’re left with an element that even the LEGO Group seems keen to avoid acknowledging the presence of – at least if the colour change across the set’s box art was done deliberately.

Okay, maybe this is all just genuine human error, and an entirely innocent mistake – perhaps the box art build actually uses an Axle 2L with Pin, which is colour-locked to black – but for the slightest chance that it’s not, it’s worth highlighting. And if you’ve found this story having just finished putting together 42139 All-Terrain Vehicle, and are now baffled by the discrepancy between build and box art, well, know that you’re not alone.

Check out our full review of 42139 All-Terrain Vehicle to see why it’s still worth picking up regardless of this puzzling colour swap. Plus, you can always switch out the red element for dark grey yourself – they’re stupidly cheap on BrickLink – while hoping that the LEGO Group might one day release the black version it’s teasing on the box…