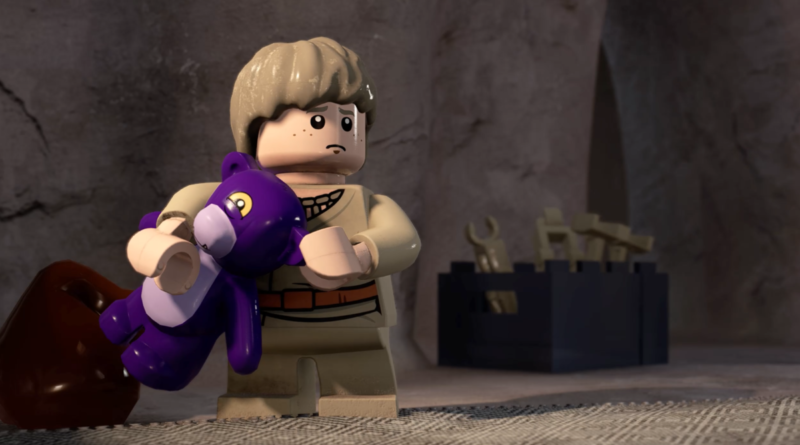 LEGO videogames are well-known for their unique sense of humour, so what are the best gags we’ve seen so far from LEGO Star Wars: The Skywalker Saga?

For every franchise covered so far, LEGO games always feature jokes and witty twists on the story that set them apart from other adaptations, even ones as well-trodden as Star Wars or Harry Potter. From what we’ve seen so far of LEGO Star Wars: The Skywalker Saga, the same will be true for the upcoming game.

With the most recent trailer included, here are our top five favourite funny moments from all the gameplay and cut scenes we’ve seen so far. Of course, the game has been going through various changes in its years of development, so not all of these will definitely be in the final version we get to (hopefully) play in spring 2022.

Obi-Wan’s cryptic comments to Luke about his father in the original trilogy have always been slightly awkward. After all, saying Darth Vader killed Anakin is definitely a few steps away from ‘I left him burning in a river of lava’. In the most recent trailer for LEGO Star Wars: The Skywalker Saga, we hear Luke asking Obi-Wan how his father died, prompting an awkward grimace from the old Jedi in return.

It’s the twists on long-standing fan jokes like these that make the LEGO humour in the videogames so perfect. It helps to lighten the mood on serious topics (like the fact that Luke’s new father figure almost killed his actual father years before).

Kylo Ren’s dogged fascination with his grandfather in the sequel trilogy was a huge part of his draw to the Dark Side, and so clearly a serious topic in the movies themselves. Naturally then, in a LEGO game, it’s the perfect choice for a light-hearted gag.

Just before Kylo’s fight with Rey at the end of Episode VII – The Force Awakens, she stumbles across him in the snowy forest, busy at work creating a Darth Vader Snowman. Kylo seems pretty proud of his work too, until he spots Rey and accidentally beheads his creation with his lightsaber. This scene is from one of the earliest looks we got at the game, but we hope it makes it into the final version.

Everyone messes up sometimes – even evil Sith Emperors. Palpatine’s lightning attack is pretty much his signature move and it’s how he almost kills Luke at the end of Episode VI – Return of the Jedi. In the 2020 trailer for LEGO Star Wars: The Skywalker Saga, we see a meta joke where Palpatine can at first only summon LEGO lightning elements, instead of the deadly digital bolts.

Considering LEGO games often feature a mixture of digital effects and animated LEGO pieces, it’s a fun gag that sees Palpatine throw the plastic lightning at Luke in a rage, before finally hitting him with the real deal and continuing the fight.

You’d think it would be much easier to rebuild a LEGO version of Darth Vader after his toasty swim in some lava. After all, you can just snap the pieces back into place and it’s job done.

Clearly, Emperor Palpatine and these Stormtroopers had the same idea, as you can see them hooking out the parts of Darth Vader with fishing lines in one of the earliest trailers for the game.

5) A Cloak Full of Porgs

One of the most dramatic moments of the sequel trilogy is when Rey arrives on Ahch-To and finds Luke. He stands with his back to her, she asks for his help, the cloaked figure slowly turns to reveal…two Porgs?

Naturally, this is not quite how it went in the movies, but it’s a fun way to play with the epic return of Mark Hamill to the franchise. Plus, no comedy Star Wars list would ever be complete without an appearance from these adorable birds.