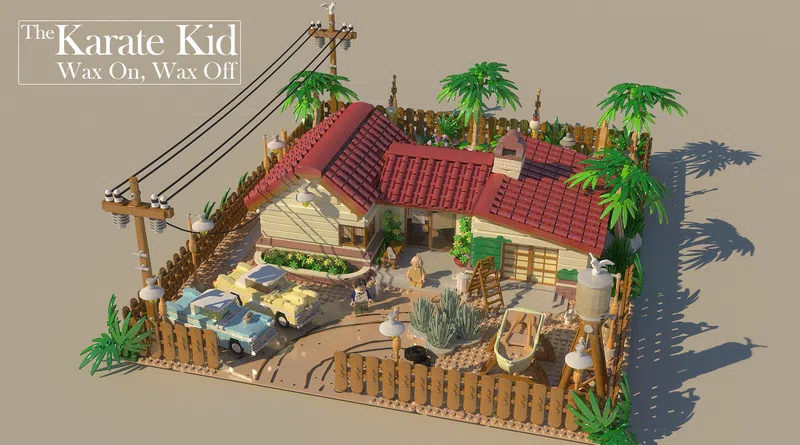 Yet another LEGO Ideas project has achieved 10,000 supports with a Karate Kid-themed project quickly passing into the review stage.

The Karate Kid first released in 1984 and quickly became a classic for its action sequences, writing, story, music and more. Now, not only is a modern-day sequel streaming on Netflix, but it stands a chance at being one of the next LEGO Ideas sets.

The Karate Kid “Wax On, Wax Off” has surged in popularity on the platform for the last couple of days, slowly climbing its way to 10,000 supporters. Now, it has finally reached that goal, making it delusion brick’s second LEGO Ideas project to make it to the review stage.

The project proposes a model for the house of Mr. Miyagi, the teacher for protagonist Daniel LaRusso with the house itself and two exterior areas surrounding by a fence. The outside features the brown, dirt ground and some palm trees growing around the edge as well as two cars at the front.

The inside is fully detailed included some chopsticks using LEGO Harry Potter wand pieces. More rooms can be seen in the embedded video. Delusion bricks already has a project in review at LEGO Ideas with Seagull Bay Lighthouse Imperial Fortress.

This is the eleventh project in the current round of the review and the second project to reach 10,000 supporters today. Here are all the projects in this round of the LEGO Ideas review:

The Karate Kid “Wax On, Wax Off”
Scania Next Generation S730
4½-Litre 1927-31 Bentley ‘Blower’
Asterix and Obelix
The Simpsons – The Krusty Burger
The House of Chocolate
The X-Files: I Want to Believe
Castle of Lord Afol and the Black Knights
Among Us: The Skeld Detailed Map
The Office
The Shire