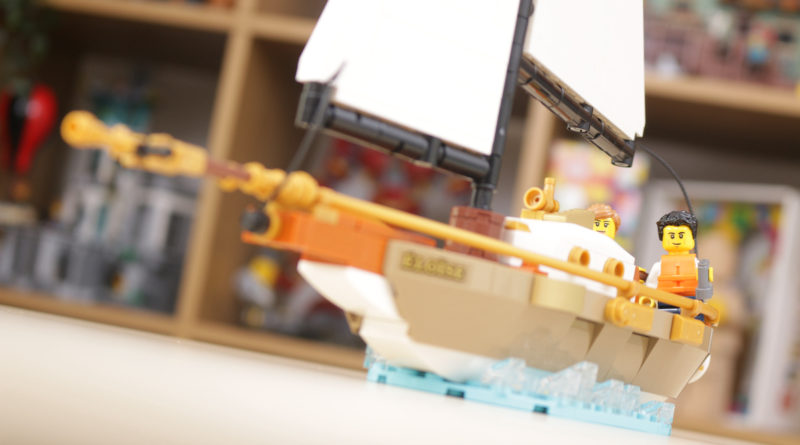 With one of the highest qualifying spends ever for a gift-with-purchase, does LEGO Ideas 40487 Sailboat Adventure deliver on expectations?

As far as gifts-with-purchase go, 40487 is the result of the LEGO Ideas ‘dream holiday’ contest, where the creative platform encouraged entrants to build – as the name suggests – their dream holiday. Yan Chevalier was announced as the winner in July 2020, and a year-and-a-bit later, here we are with the second-ever Ideas-GWP crossover, following January’s briefly-available 40448 Vintage Car.

40487 Sailboat Adventure also stands out as a gift-with-purchase for requiring one of the highest spends at LEGO.com or in LEGO stores ever. There have been higher-priced set-specific GWPs such as 5006293 Chariot, which was available only with purchases of 10276 Colosseum, and brief oddities such as that same GWP coming back for spends in the US only of a staggering $600.

However, at a £200 / $200 / €200 threshold 40487 stands as one of the most expensive LEGO GWPs to have been made available on product-wide spends. One of the last such ‘freebies’ at this level was 5006291 2×4 Teal Brick from last year’s VIP Weekend, the promotional event at LEGO.com just prior to Black Friday.

It’s a lot of money to try to entice LEGO fans to part with, so it’s worth making a big deal of and putting 40487 Sailboat Adventure under a little extra scrutiny. On face value, then, it appears to hold up – the images and packaging of the Ideas set are impressive and certainly sell what looks like a substantial, high quality and quite unique LEGO model, and it’s a similar impression in opening the box.

The build comes with 330 pieces and includes two minifigures and two moulded dolphins. As a final model, the sailboat measures 29cm long and 28cm high, registering at an impressive size all round, and one that helps give the set a greater sense of value.

In any LEGO set, let alone one being scrutinised for value, though, size is nothing without detail, and this is where 40487 Sailboat Adventure really impresses. It’s built using some interesting techniques not widely seen before in previous LEGO boats, and that is very much to its benefit, offering a model of a boat put together in a way and with parts selection and colours that – although previously available – we haven’t seen used in a comparable way before.

After years of CITY and Friends boats, 40487 Sailboat Adventure makes for a welcome departure and, comparisons to one side, a fine model in its own right.

It’s also remarkably similar (if not near-identical in design) to the original submission by Yan Chevalier. That’s a credit to the fan designer for their work and to the Ideas team for successfully keeping much of the intended model in place. It’s also, unfortunately, ever so slightly an issue for a notable mistake.

That is with the front sail (known as the jib sail), in that it is built connected to a boom in the same way that the back sail (the main sail) is. As pointed out by one of our readers (thanks for getting in touch John!), the jib should not have a boom below it, as it is intended to move freely from left to right with the use of two jib sheets (ropes).

A cursory glance on Google will demonstrate as much, while a look at the types of pieces included in the set would even suggest it wasn’t beyond design, even if it would have impacted what is a pretty satisfying way that you build the sails, and the more secure playability that the sails currently offer. Ultimately, while it is a notable error it’s not one that absolutely everyone will notice, nor does it detract too greatly from the model in hand.

40487 Sailboat Adventure is available from August 1-3 for VIPs and from August 4-29 for everyone (while stocks last) with product-wide spends of £200 / $200 / €200 at LEGO.com and in LEGO Stores. It may be a gift-with-purchase with one of the most expensive qualifying spends yet from the LEGO Group, but you receive an interesting, one-of-a-kind model that – importantly for the money required – offers more-than-credible value.