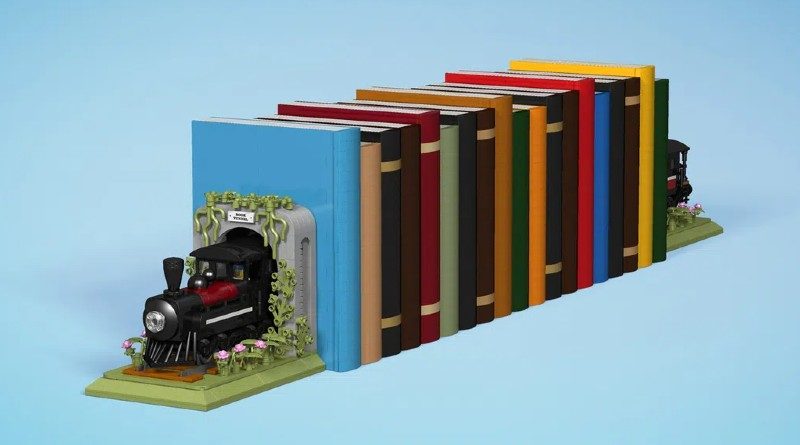 The latest LEGO Ideas project to reach 10,000 votes has been revealed as a pair of bookends, making it the second to do so.

It seems that LEGO Ideas users have a liking for keeping their books organised, as another bookends project has reached the LEGO Ideas review stage, but with a train-themed twist.

Jimmi-DK is the creator behind what could potentially be the latest LEGO Ideas set. The project proposes a set of bookends, themed to a train tunnel with one end of the locomotive on each side. ‘The book tunnel’ as a label describes has the main engine exiting out one side while a carriage enters at the back. One feature in the project is a full interior of the included portions of the train.

In an update, the 945-piece project also added some rubber feet to the proposal, to prevent slipping when heavy books are stacked in-between. Five minifigures are also suggested to come with the set, but unfortunately, none of the images provides a good look at them. Should the project become a reality, it could provide a good opportunity for some new printed pieces for a conductor and more.

This is the 23rd project in the current round of the LEGO Ideas review. It seems that it’s going to be another tough decision for the judges with what is slowly becoming a very full round. Here are all the projects in the current review stage:

Train Bookends
The Sewing Workshop
Forth Bridge
A Nice Day at the Farm
The Castle of Brickwood Forest
Baba Yaga
Claus Toys
Animal Crossing: New Horizons Paradise
NASA’s SLS & Artemis
LEGO bookends
Metroid: Samus Aran’s Gunship
Hyrule Castle (The Legend of Zelda)
The Karate Kid “Wax On, Wax Off”
Scania Next Generation S730
4½-Litre 1927-31 Bentley ‘Blower’
Asterix and Obelix
The Simpsons – The Krusty Burger
The House of Chocolate
The X-Files: I Want to Believe
Castle of Lord Afol and the Black Knights
Among Us: The Skeld Detailed Map
The Office
The Shire