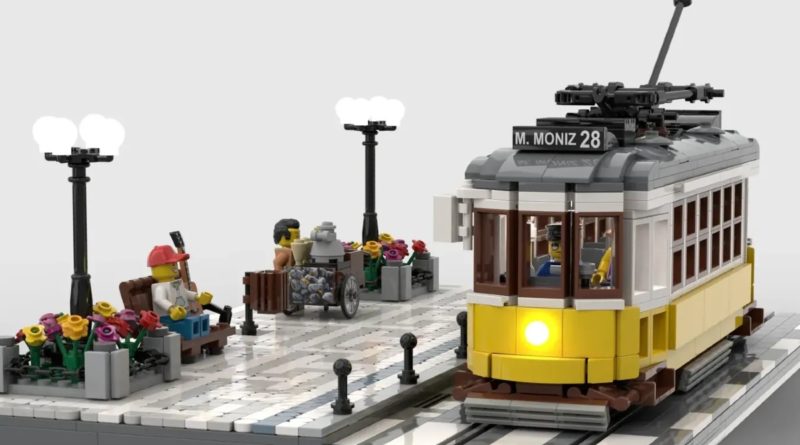 The seventh submission in the latest LEGO Ideas review round is Tram (Elétrico De Lisboa) from Ezequiel Alabaça, as their first project to reach the necessary number of supporters to be in with a chance of becoming an official Ideas set.

The new 10K club member notes in the description of the model that they were inspired by their day-to-day use of the trams in Lisbon to depict them in bricks, specifically recreating the number 28 tram as it passes along one of the main avenues.

The tram itself uses 692 elements while the pavement features 1,447 bricks for a total of 2,139 parts used in the project. The updates section of the project’s page reveals that several Portuguese media platforms shared the project in broadcasts, likely revealing how it reached 10,000 supporters in just over three months since it was first posted.

This submission is strikingly similar to another Lisbon model that passed into a previous review phase, indicating that there is an audience for such a build.

It now sits alongside six other projects in the second 2022 LEGO Ideas review, which you can see for yourself by clicking on the links below:

The next LEGO Ideas model to officially launch is 21333 Vincent van Gogh – The Starry Night on June 1 for everyone, or earlier from May 25 for VIP members.

Support the work that Brick Fanatics does by purchasing your LEGO Ideas sets using our affiliate links. Thanks!