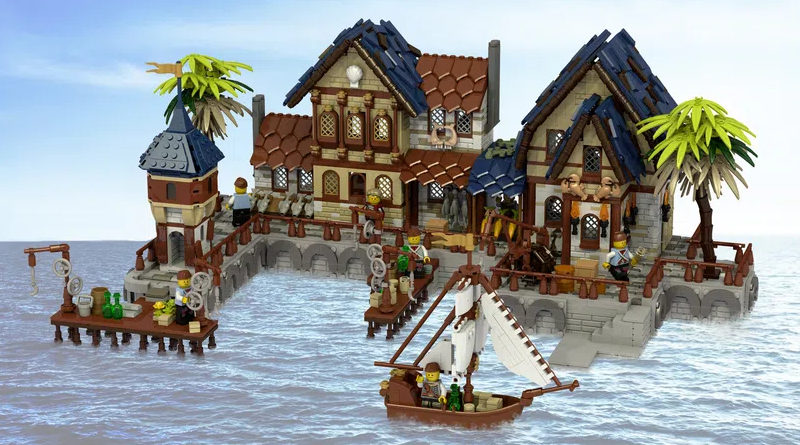 The designer behind 21325 Medieval Blacksmith has successfully taken another Castle-themed project to the LEGO Ideas review stage.

Clemens Fiedler’s Medieval Harbor has racked up 10,000 votes in the nick of time, with only a month or so left until it expired from the crowdsourcing phase. Unlike their other LEGO Ideas projects, including 21325 Medieval Blacksmith, the Medieval Harbour is just a facade with the rear showing the interior.

However, there are clearly some areas where the success of the LEGO set has inspired some changes in the build, such as the roofs now being made almost entirely of the shield pieces.

It wouldn’t be a harbour with a ship, so a small model is included but there appears to be plenty of room for more sailors to dock their vessels. The kingdom that Clemens’ is beginning to build also appears to span destinations across the world, with a pair of palm trees suggesting a tropical setting.

We’ll have to wait and see if another Castle-inspired project is chosen for a future LEGO Ideas set, but non-fortress locations may stand a chance even amidst the new 31120 Medieval Castle. Medieval Harbour now sits among 13 other projects in the next LEGO Ideas review: