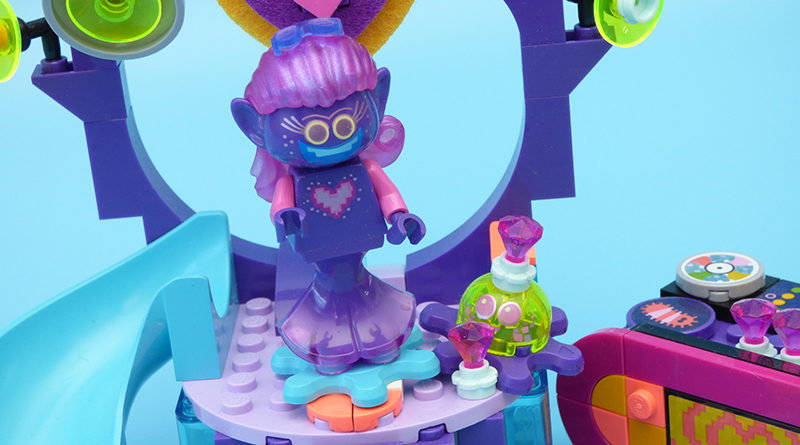 To understand the wackiness of the LEGO Trolls World Tour theme, the wackiness of the film (recently released for digital rental) must be understood. The pop-loving Trolls of the first feature discover that there are six lands, each with a tribe of Trolls dancing to a very different bear. Rock chick Queen Barb wants to destroy the other tribes and play her music throughout the world, which means Poppy must unify the other lands and stand up for their right to be different.

If this all sounds a little similar to the inventiveness of The LEGO Movie series, that is not a huge shock – Mike Mitchell directed the first Trolls flick and ended up co-directing The LEGO Movie 2: The Second Part with Trisha Gum.

With all of that preamble out of the way, the fact that this set is an underwater rave featuring a mermaid techno DJ makes is less surprising. It includes lots of dark purple and lavender elements as well as some uncommon pieces for fans to enjoy.

This is a set that most LEGO fans will buy for the parts – but those who build the set before organising the pieces will actually have a fun experience. It builds something a bit better than would be expected from a small release with a huge moulded slide piece.

What jumps out immediately is the colour scheme, with the wonderful dark purple and lavender pieces interspersed with trans bright green and vibrant coral elements. It genuinely has the vibe of a rave, which is enhanced through the shiny stickers.

The main build is the stage, which as a carefully shaped heart backdrop and features a spinning disc for the mermaid and (six legged) octopus to be placed on. A drawer below the stage reveals a blue lightning bolt piece, which may be for a show-stopping finale or may factor into the movie’s plot.

As for the DJ booth, it is a marvellous little construction. Using SNOT (studs not on top) technique, the front has a nice oval shape with a central sticker featuring a pixelated heart shape, making it feel like an authentic place to lay down beats. Th rerecords can be stored inside thanks to two doors.

While stickers are frustrating when compared to printed tiles, well-done stickers should still be acknowledged. The records in this set are great, with one record sleeve labelled ‘Trollex’ – a nod to real life DJ Skrillex. The consistent graphic design and shiny elements make the labels feel part of a cohesive set.

The USP of the LEGO Trolls World Tour theme is that felt elements are included, in the case of 41250 Techno Reef Dance Party there are two love hearts to go with the love heart motif. They sit perfectly above the stage and the colours match the rest of the model, but what further use they have is debatable.

Two characters are included in the set. The octopus – with six legs – is basically a face printed on a Final Brick 2×2, which works. The Mermaid though, is excellent. Her tail piece has been designed to match the shape of her head, which has more cartoony proportions than a typical minifigure head. The hair is also great – the design throughout this minifigure deserves credit for finding a way to deliver the movie proportions in a recognisably LEGO way.

A relatively straightforward design is elevated in LEGO Trolls World Tour 41250 Techno Reef Dance Party thanks to a compelling and unusual colour scheme with a perfect complementary minifigure. This is a set that will pleasantly surprise those who build it.