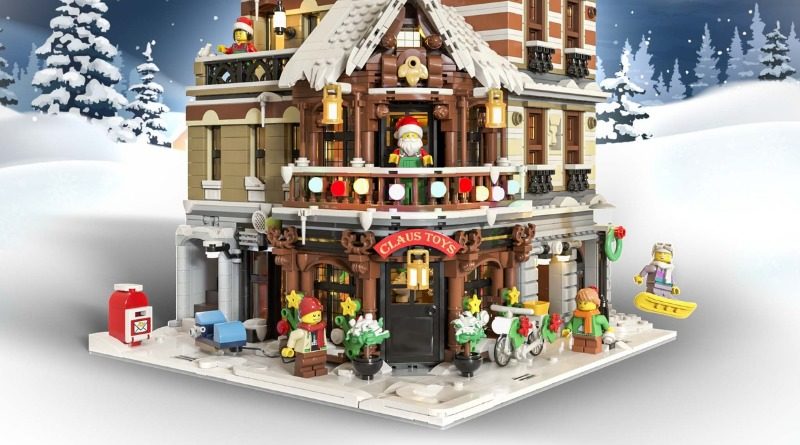 The fan designer responsible for LEGO Ideas 21322 Pirates of Barracuda Bay has reached 10,000 votes for the eighth time with a Christmas-themed modular building.

Pablo Sánchez Jiménez’s Claus Toys marks his first project in the first 2021 review, but it might not be his last. The Costume Store currently has around 6,500 supporters and is rapidly gaining support, as the prolific creator aims for a second official LEGO set.

He might not need either of those modular building-style designs to achieve that goal, though, as he currently has no fewer than four projects currently under review by the Ideas team: The Car Wash, The Bakery, Brickwest Studios and The Little Venice.

Either way, Claus Toys now joins them in the review stage, having taken just 36 days to rack up the necessary votes. Plenty of users are clearly still feeling festive, even with the holiday season firmly behind us.

Here’s the full list of all 17 LEGO Ideas projects in the first 2021 review, which looks sure to break last year’s record at this rate:

Claus Toys
Animal Crossing: New Horizons Paradise
NASA’s SLS & Artemis
LEGO bookends
Metroid: Samus Aran’s Gunship
Hyrule Castle (The Legend of Zelda)
The Karate Kid “Wax On, Wax Off”
Scania Next Generation S730
4½-Litre 1927-31 Bentley ‘Blower’
Asterix and Obelix
The Simpsons – The Krusty Burger
The House of Chocolate
The X-Files: I Want to Believe
Castle of Lord Afol and the Black Knights
Among Us: The Skeld Detailed Map
The Office
The Shire