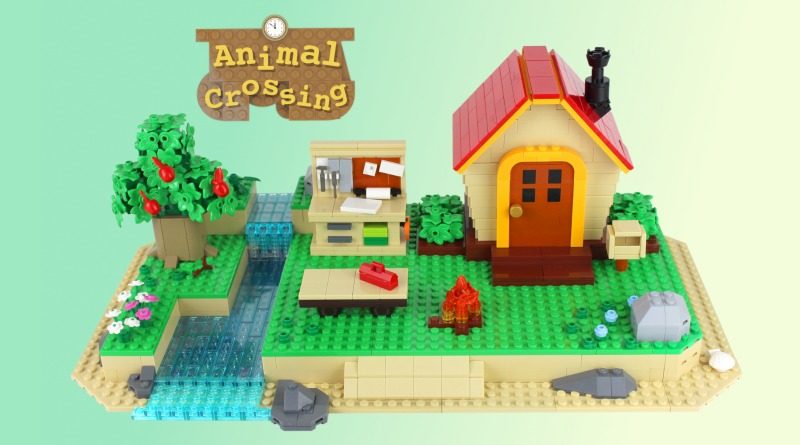 Tiago Catarino worked as a designer in Billund from 2017 to 2020, and was responsible for sets including 92177 Ship in a Bottle and 10267 Gingerbread House. He now runs his own YouTube channel as a fan designer, where he has over 143,000 subscribers.

With those credentials in mind, you might be surprised to learn that Animal Crossing: New Horizons Paradise is Tiago’s 10th LEGO Ideas project – but only his first to reach 10K. However, his previous efforts were all submitted way back in 2014 and 2015, long before he became well-known among the LEGO community.

His newfound status may have therefore had something to do with his latest project achieving support in well under a year. The Nintendo-themed model will now move to the review stage, where the Ideas team will decide whether to produce it as an official set.

With its lush green foliage and shimmering blue river, Tiago’s design expertly conjures up fond thoughts of one of Nintendo’s best-selling franchises. (‘Paradise’ is definitely the word.) The initial pitch doesn’t include any characters, though, because it’s built bigger than minifigure scale. Any official model might therefore include brick-built characters, or otherwise downsize the build to allow for Animal Crossing minifigures.

This isn’t the only project in the first 2021 review based on a Nintendo property, with Diego Maximino’s Metroid: Samus Aran’s Gunship and Artem Biziaev’s Hyrule Castle already on the list. Whether the LEGO Group’s current partnership with the video game company for LEGO Super Mario will help or hinder these product ideas is anyone’s guess, but it hasn’t really worked out for The Legend of Zelda so far.

Here’s the full list of Ideas projects in the running in this review so far:

Animal Crossing: New Horizons Paradise
NASA’s SLS & Artemis
LEGO bookends
Metroid: Samus Aran’s Gunship
Hyrule Castle (The Legend of Zelda)
The Karate Kid “Wax On, Wax Off”
Scania Next Generation S730
4½-Litre 1927-31 Bentley ‘Blower’
Asterix and Obelix
The Simpsons – The Krusty Burger
The House of Chocolate
The X-Files: I Want to Believe
Castle of Lord Afol and the Black Knights
Among Us: The Skeld Detailed Map
The Office
The Shire