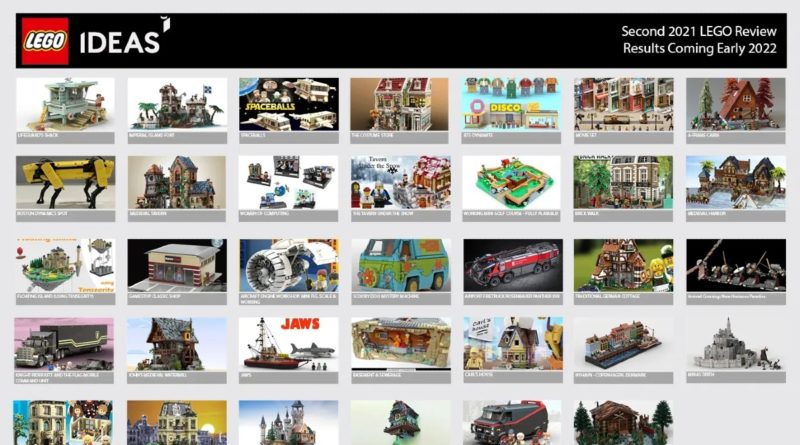 Another batch of LEGO Ideas projects have progressed to the review stage – but which of them stands the best chance of becoming an official set?

The qualifying period for the second 2021 review closed earlier this week, with a total of 34 individual projects reaching 10,000 votes between May and September. Every single one of those will now advance to the review stage, to be considered for production as an official set by the LEGO Group.

Not all of them can make the cut, though: and in fact, going by previous review rounds, probably only one or two will. With such a stacked Ideas slate across the rest of 2021 and into 2022, that’s not necessarily a bad thing, but it does mean the review board will have a tough task on its hands.

To imagine what the Ideas team might be going through right now, we’ve picked out five projects from the latest crop that seem to have the best chance of getting the green light, based on previous sets, the current portfolio and gaps in the market.

5 – The Tavern Under the Snow

What if 21325 Medieval Blacksmith met the Winter Village Collection? You’d probably end up with something like Lego_Is_Art’s The Tavern Under the Snow, a seasonal take on a classic pub that includes elements for spring, summer, autumn and winter vibes. It ticks a lot of boxes the LEGO Group already covers, so feels like the biggest stretch in this list, but seeing them all combined in one model could help it stand out.

This 1987 parody of Star Wars might not seem like the most obvious choice for a LEGO set, but we already know that the LEGO Group is more than happy to spray us with the nostalgia hose when circumstances allow. Besides, if something as seemingly obscure as Queer Eye can (apparently) get a LEGO set, who’s to say Spaceballs is off-limits?

Okay, one project based on the cult hit has already been rejected – but as the LEGO Ideas team says, getting a project past the review stage is really all about timing. And maybe that time is 2021…

The LEGO Ideas team has recently embraced the beach in its coastal contest, the winning entry from which will become a future gift-with-purchase. That could either help or hinder Alex Storozhuk in his quest for a second LEGO Ideas set (following the upcoming Home Alone House), as his Lifeguard’s Shack could either sit nicely next to that GWP – or become direct competition to it.

Once again, this could be all about timing: it’s likely that the GWP would launch long before the Lifeguard’s Shack hits shelves, and we haven’t otherwise seen much like Alex’s build in the regular Ideas line-up (21310 Old Fishing Store is probably as close as it gets).

Andrea Lattanzio’s A-Frame Cabin stands distinct in this batch of LEGO Ideas projects for its incredible part usage (those are Mjolnirs in the base), detail and aesthetics, all of which combine to make for a build unlike anything currently in the crowdsourced theme’s extensive portfolio.

Based on how much 21325 Medieval Blacksmith changed on its journey from original concept to store shelves, it’s fair to assume the LEGO Group might also pare back some of the A-Frame Cabin’s complex detail and techniques in favour of a more accessible build – but that surely wouldn’t take away from what would still be a breathtaking addition to the Ideas line-up.

Spielberg’s classic 1975 blockbuster already has a connection to LEGO, having been on the shortlist for the 150th BrickHeadz poll. It didn’t quite make the cut then, but we know the LEGO Group is open to the licence – presumably as part of its 18+ range, given Jaws is probably beyond the scope of its primary target audience.

With all that in mind, Ideas user Diving Faces’ Jaws project feels like a dead cert for the second 2021 review. It’s likely that the LEGO Group will simply use it as a springboard for its own Jaws set, just as it did with The Pirate Bay in 21322 Pirates of Barracuda Bay, but the end result – if it gets the green light – should still be something to behold. We’re going to need a bigger shelf…

Click here to check out the full list of LEGO Ideas projects in the second 2021 review. The next Ideas set to hit shelves will be 21329 Fender Stratocaster, while the results of the first 2021 review will arrive in the autumn.