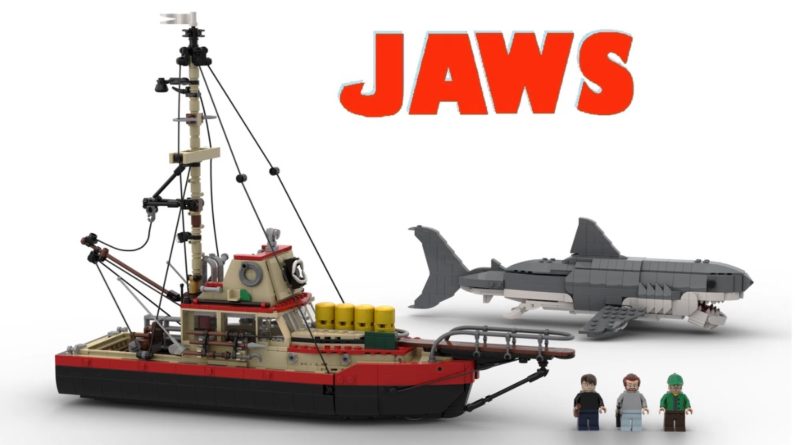 You’re gonna need a bigger display shelf: a LEGO Ideas project based on Jaws has advanced to the review stage, which means it could one day become an official set.

Jaws hasn’t always been on the thumbs-up list for LEGO Ideas. Until late last year, the franchise was among the licences deemed inappropriate for the LEGO Group’s values. That all changed when the classic movie popped up among the candidates for the 150th BrickHeadz – and while it ultimately lost out to Star Wars in that poll, the Ideas platform still gave Jaws submissions the green light.

Within days, Ideas user Diving Faces had already uploaded a sizeable rendition of both the shark and the Orca, along with minifigures of Martin Brody, Matt Hooper and Quint. Since then, they’ve tweaked minor details including the trim of the boat and the size of the shark, but the overall concept has remained consistent – and has now proved popular enough to rack up the necessary 10,000 votes.

“I built this model because Jaws is my favourite film ever,” Diving Faces explains on the submission page. “I have a great passion for both LEGO and this movie and I wanted to create my own Jaws set.

Jaws now joins 22 other LEGO Ideas projects in the second 2021 review. This round is shaping up to be a little less congested than the record-breaking first review of 2021, which will presumably be a great relief to the Ideas team tasked with whittling them down. Here’s the full list so far:

One thought on “LEGO Ideas project based on Jaws reaches 10K”