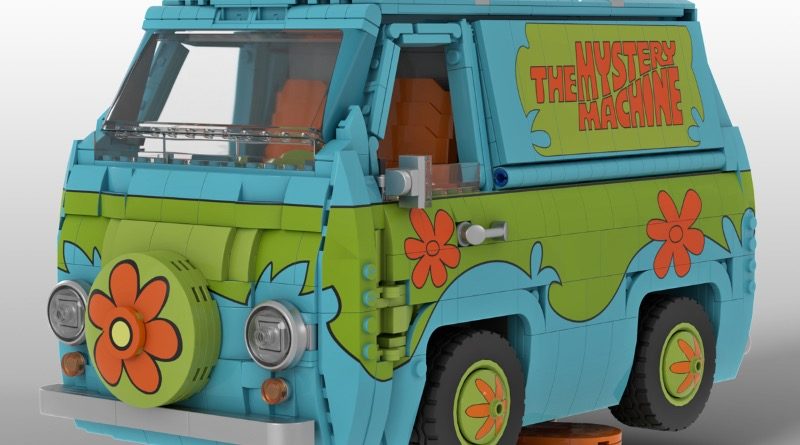 Zoinks! A supersized version of the Mystery Machine from Scooby-Doo has racked up 10,000 supporters on LEGO Ideas, and will now progress to the second 2021 review.

Let Them Fly’s colourful build imagines the iconic cartoon van at a scale that would sit happily with the likes of 10295 Porsche 911 and 10265 Ford Mustang, coming in at exactly 1,969 pieces. That’s the same piece count as 92176 NASA Apollo Saturn V, and boasts a similarly thematic link, as the first episode of Scooby-Doo originally aired on September 13, 1969.

That makes Let Them Fly’s Mystery Machine a timely project in the same way that Brent Waller’s Seinfeld – unveiled yesterday as 21328 Seinfeld – was originally uploaded to celebrate the sitcom’s 30th anniversary. It’s a much more functional model than that display piece, however, featuring opening front and back doors, a removable roof and a rotating plinth.

If it gets the green light, the Mystery Machine won’t be the first time the LEGO Group has produced sets based on the classic Hanna-Barbera cartoon. A full wave of minifigure-scale Scooby-Doo sets arrived in 2015, including a much smaller interpretation of the gang’s ride in the 302-piece 75902 The Mystery Machine.

That may give the Ideas team pause when it comes to reviewing Let Them Fly’s project, but the fact that they were able to publish it on the platform at all suggests the possibility of a follow-up Scooby set isn’t entirely off the table.

The Mystery Machine now joins 15 other projects in the second 2021 review. Momentum around 10K projects seems to have slowed down considerably compared to earlier this year, when a record-breaking 57 projects reached the first 2021 review, but there’s still plenty of time for this list to grow.