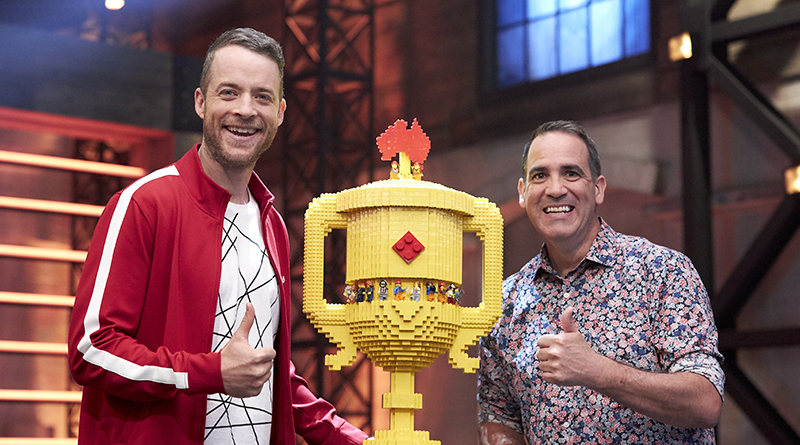 After proving a ratings smash-hit with its first season, LEGO MASTERS Australia returns in a few days to put 16 new contestants to the test and see how their LEGO building skills measure up. Returning with the show is host Hamish Blake, who promises some new surprises in this second season.

Brick Fanatics asks Hamish about his experience on the first season of LEGO MASTERS and what fans have to look forward to this year in this exclusive interview.

How was it getting such a positive reaction to the first season of LEGO MASTERS?

It was lovely. I mean, you can’t say ‘surprising’ because then it sort of implies that you didn’t think people would like the show, and we did, because we had a lot of fun making it. But having said all that, when you’ve been in tv for a while and anything works…it’s surprising!

Have you brushed up on your own building skills in between the first and second seasons?

I wish. I had dreams of coming home and re-creating stuff I saw on the show for my five-year-old, but as I sit down to build things basically I freeze and just build very basic spaceships as per usual.

Along those lines, do you have a favourite LEGO brick now?

I mean, does a minifig count as a brick? If you judged my favourite as ‘thing I stole from the Brick Pit most frequently’ then that would have to be my ‘favourite’.

What challenge in Season 2 are you most eager for the audience to see?

I think the challenges take it up a notch in terms of creativity this year. It became a bit of a theme to wrong foot the contestants, it’s almost a sport now to see how much each challenge can bend their minds. There are great technical challenges (having to build off one hanging brick) that inspire creativity, then there are just flat out cool challenges like our Star Wars episode.

What surprises can the audience expect in this new series?

Just when you thought the Golden Brick was the most powerful Brick on television, guess what? It still is. But there is now a new, slightly less powerful brick in play that will blow people’s minds!

Your hosting style seems to parody someone hosting a tv show – do you enjoy playing with the format and conventions of tv contest shows?

I have always done comedy shows, plus I had never really hosted a show – on my own – before, much less a reality show. My mission was to try to have as much fun with it as possible, and yes, sometimes that becomes mocking the format! But we never mess with the contest. We love the contest and are genuinely into it, so that’s never where we feel like poking fun, but the team at ESA (the production company) make a lot of reality and they, more than anyone, love being able to parody a few of the well-worn tropes we’ve all been seeing for 20 years now!

Do you have a favourite LEGO memory from childhood?

I used to love going to the exhibitions. I grew up in Melbourne and they were on like every couple of years or so at a local shopping centre. It was like the Olympics when it rolled around. Actually reading that, it was probably on every year, we probably just missed a few here and there and my parents told me it was sporadic!