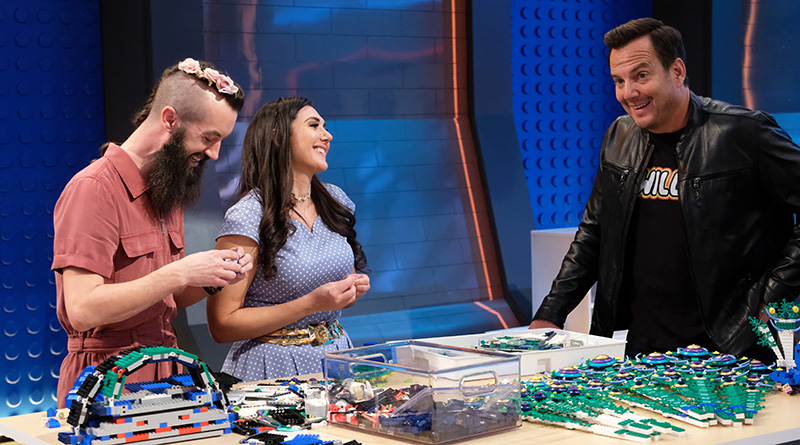 Sam and Jessica have come a long way during their 10 weeks on LEGO MASTERS USA – with the results announced, Brick Fanatics speaks to the finalists

Despite a shaky start, Sam and Jessica have gone all the way to the LEGO MASTERS USA final and finished in third place. Building an incredible peacock complete with cheeky monkey buddy, they demonstrated the possibilities of the LEGO system.

Brick Fanatics speaks to Sam and Jessica in this exclusive interview to find out how they found the experience of going from the auditions to the final.

Jessica: Yes! Though, I didn’t know what to expect. I know my strengths were in creativity, ingenuity, and idea generation. You can be an amazing builder, but ultimately you have to have a brilliant and exciting idea. I’m not a set builder, so I knew that seeing parts differently than their intended use would give me a unique advantage.

Sam: I was confident that I was a capable builder.  There were a LOT of AMAZING builders, so my confidence didn’t last.

Sam: What can you do? You practice every time you build, but there isn’t a way to just suddenly know how to do everything.  I learned how to build a ball out of classic bricks.

Jessica: Building sets and studying geometric shapes. Being an avid poker player, I also applied the strategies of traditional Hold’ Em to this competition.

Jessica: I was overwhelmed, excited, shocked… a rush of fantastic emotion.

Sam: It was incredible and overwhelming.  Being told you can use any of the bricks there is great, finding them and learning the sorting system is a totally different thing.  I was used to how my pieces at home are sorted, so finding things in the Build Room was not always easy or logical.

Sam: I think the hardest part for anyone there was working with a partner.  LEGO is usually a solitary activity.   You build on your own.  Someone may help sort pieces or find pieces, but few people actually build together regularly.  Trying to communicate and understand the other person’s vision, agreeing to that vision, and deciding on a technique can be difficult.

Time is also one of the biggest factors.  At home, you rarely have a clock ticking so you can think and plan and revise as often as you want.

Jessica: I live for a competition. I’m competitive by nature. The greatest challenge was learning about my partner and adjusting to his communication style. We were the only team that didn’t know each other or build with each other prior to the show, so that put us at a big disadvantage.

Jessica: The bridge challenge, it showcased the magic of LEGO. I also loved the symbolism behind it, bridging the gap between my partner and I to accomplish great things.

Sam: I loved the cut in half challenge because it was sculptural and gave us freedom to do whatever we wanted.

Sam: Any of the challenges where we were required to use motors.  I never use electronics in my builds at home, so figuring out gears, motors, and movement was difficult to say the least.

Jessica: The droid challenge was the hardest because it was more about technicality than creativity which was not my strength.

Sam: Will Arnett was hilarious every day.  He had a great attitude and a dark comic streak.  I doubt any of the things that really set me off laughing will make it on the show because they were not ‘family friendly’.

What was the inspiration for your peacock build in the finale?

Jessica: We were bouncing around ideas, we really wanted to do something that represented us as artists and make a really artistic beautiful showpiece.Out of nowhere I was like, ‘how about a peacock?’, Sam immediately said yes. When he immediately says yes, it’s like we both agreed we can make it gorgeous and represent us as artists, then we came up with a story around it to really bring it to life.

Sam: We were like that for every challenge, if we said something and the other one goes ‘oh yes’, we know we are already on the same page. We thought a peacock would be so beautiful, and I have been in a LEGO group for a long long time and never seen a giant peacock – except for one at LEGOLAND, that is completely brick built.

How did you come up with that way of building the feathers?

Sam: Jessica and I were experimenting on every single one of our builds, we would try something, going, ‘what if this works?’ With LEGO there are so many different ways to do it, even in the Mega City Challenge there were no more windows in the studio to use, all the other teams had taken them all, so we were trying to be creative – how do you create a window without the window frame? Something you have to do that when you are at home, you have to be creative and work with what you have.

That feather worked, it is a beautiful feather, so we said, ‘let’s make 20 of those’. Then it is trying to figure out the engineering of how to hold the feathers up, they are so heavy and there were 20 feathers that are three feet tall each, that puts a lot of weight and a lot of stress onto whatever is  holding it. Trying to engineer it was way more difficult than we thought it would be but we figured out the engineering as we went.

It seems like the monkey of the build came together in the last few hours?

Sam: Everything in the show felt crunched when we were there because there’s not a lot of time. We are not speed builders, either one of us, we are artists who take our time, some builds at home can take months and months and months coming back to them and refining them. Up until the last few hours we were trying to figure out for sure what we wanted to do, it was definitely a time crunch making the money but we came together with some amazing stuff in those last few hours, there are things that didn’t get put in, like Jessica had made a completely working sewing machine that had a mechanism in it.

Jessica: Yeah we had a fully functional sewing machine that was too heavy, we didn’t want to get rid of our adorable banana table because it was beautiful. Sam and I agreed that we wanted to make a show stopping art piece that really caught the eye so we spent extra time on the peacock because at first we only had one row of feathers and we looked at each other, and it looked good, a big peacock, but it wasn’t great. We decided it was worth making two more rows of feathers to really make it wow.

Where did the whole monkey concept come from?

Jessica: Sam’s last name is Hatmaker so I thought it would be funny if the monkey is a hat maker, , so that is where I got the idea from. Sam and I both like the Mad Hatter and we wanted, throughout the competition, to try and do a Mad Hatter theme somewhere. We wanted to stick some kind of hatter element in our finale piece so that is what we decided on.

Sam: The experience brought me a new LEGO family, friends, and opportunities to show the world my talents.

Jessica: Having the opportunity to share my talent with the world is invaluable. I reminded myself of that constantly. I also wanted to develop myself as a builder and as a person and I believe I accomplished both.

Jessica: I knew I was tough, but I didn’t know I was that tough. This was by far the most challenging experience of my life. I learned so much about LEGO, myself, and the others around me and I feel blessed to be part of such an amazing community.

Sam: I learned so much.  My partner, Jessica “Ragzy”, made me overcome my self-doubt and push my limits.  She encouraged me and saw my talent as valuable when I didn’t recognise it.  I learned skills from other teams, and I learned that sometimes your best creation can just me made up as you go along if you just set yourself free and build.  I learned so much about how a competition show is made, and how nobody at home will ever understand the process, the stress, or the high of making something incredible.