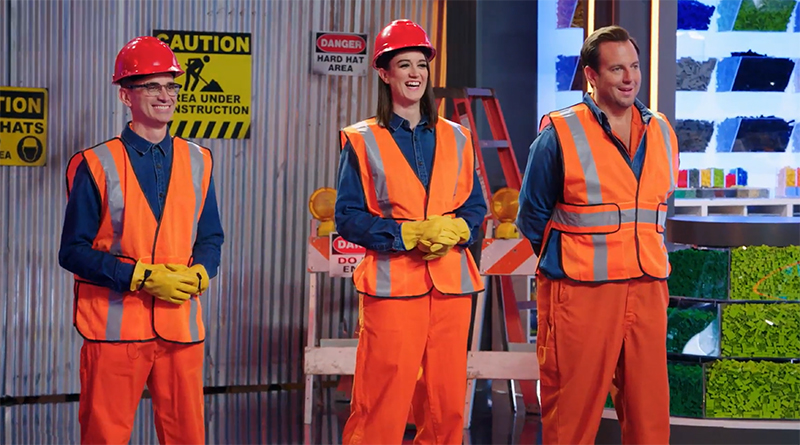 In LEGO MASTERS USA episode five, what sounds like a straightforward task turns out to be trickier than any of the teams anticipated. Each pair of builders must construct their own city block that will be part of a larger layout, but as ever it needs some imaginative flair as well as the kind of impressive scale television demands.

It was surprising when at the end of last week’s episode, this episode was trailed with Christian and Aaron’s build crashing to the ground as they attempted to wheel it back in place. The heart-breaking moment, that will have any LEGO builder empathising, was played about five times during the course of this episode.

Thankfully, it was not the all-out disaster it initially seemed as it would have been brutal to see them eliminated for the arbitrary reason of being bad at wheeling LEGO across a messy floor. While the challenge initially was simply to build a city block, a twist had the teams putting their city under attack.

Christian and Aaron’s enormous tower was impressive indeed, but what was perhaps even more impressive was how quickly they constructed the smog monster that they were having attack the city.

Mark and Boone also deserved the accolades they received, with a fun concept that was suitably out there. A lot of builds quickly gravitate towards fantasy or sci-fi in this competition, so seeing the duo build a crazy fast food structure that ended up featuring anthropomorphic hot dogs was great fun.

While Mel and Jermaine came in for a bit of criticism, one of their buildings was particularly well done, with a nice mix of colours and alternating shapes. Their oversized 2×4 bricks also stood out nicely.

It seemed that Tyler and Amy fudged things a bit this week, building a giant model that was technically impressive, but never really felt convincingly minifigure scale. Sam and Jessica struggled with their build, and while the beanstalk looked impressive, even the giant felt a bit lost on it.

The standard was very consistent this time around, making it hard to assess who would be going home. Krystle and Amie have unfortunately been overcomplicating their builds, which is what sent them home this time. It is a real shame as their early builds showed a real visual flair, but they have not demonstrated that to the same extent in this episode or last week’s.

As judges, or Brickmasters, Jamie and Amy got a little more screen time in this episode and were doing a great job of giving the builders useful advice that they could choose to follow, or unwisely ignore.

Next week things change up again, with two challenges – a car race task and a bridge building test. It is likely that the former will see the return of the Golden Brick, while the latter will put the less function minded teams out of their comfort zone.