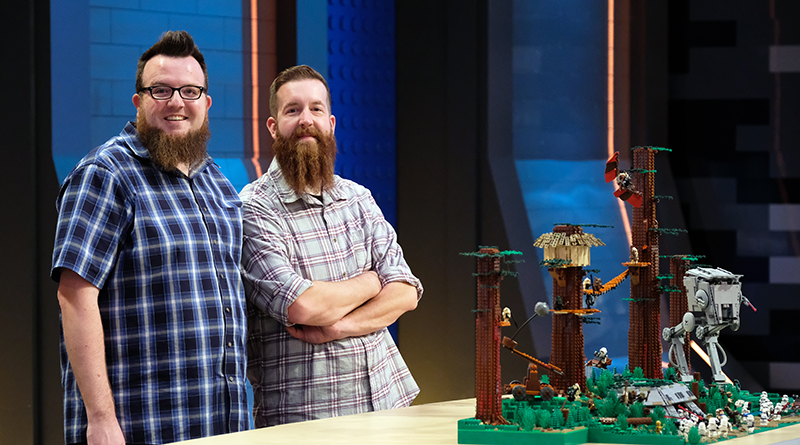 The competition is over, so it is time to hear how Mark and Boone found the journey that took them to the LEGO MASTERS USA final

Thousands of LEGO fans applied for a place in LEGO MASTERS USA, with ten pairs of builders entering the Build Room at the beginning of the season. Mark and Boone came in second, after building an incredible model dedicated to creativity.

In this exclusive interview with Brick Fanatics, the bearded builders explain how it felt going all of the way to the final and reveal their favourite challenges.

How did it feel making it all the way to the final?

Mark: Wishing, hoping, we would go all the way, then we went all the way. We completed every challenge they threw at us the best of our abilities, we had our low points but it was fun, it was great, we got the opportunity to do everything they asked of us.

Boone: Yeah, when we started the process of LEGO MASTERS, we just were so ecstatic to even have the opportunity to be there and in the first couple of episodes we had no idea how long we’d last, so getting to the finale was incredible. There was no part of that experience that we didn’t get to do – and unfortunately not all of the teams are able to say that. It was an incredibly rewarding experience in the process, it has been a real wild ride.

Mark: It was amazing. I couldn’t believe what I saw. Boone and I were among the first ones in the build room. The construction crew was still putting the finishing touches on the set.

Mark: The clock. Being on the clock means you have to make creative decisions faster. As a creative person, you have to run with your first idea and nail it or you’re going to waste a lot of time when other teams are already going. The clock never stops.

Boone: I agree the trickiest thing is the clock. At home, my design process allows for an incredible amount of trial and error; I just try things and change things until I think I have something great. The clock changes all of that. Any time you spend building anything that won’t end up in your final piece feels like wasted time.

Mark: Bridge challenge. Because the majority of the bridge challenge was about structural integrity and ingenuity opposed to building a magical land. It had to function, it didn’t have to do anything but look good and function. We nailed it.

Boone: My favourite challenge was definitely Star Wars! Being even a small part of something as special as the intersection of the LEGO and Star Wars fandoms is really special to me.

Mark: The cut in half challenge because I was going for something else, I was going for the cuckoo clock and then I turned and the next thing was the laptop. We had it and I had no motivation. We had the roughest build. But once we started going with it we did good.

Boone: The toughest challenge for me was the Storybook challenge. We had these great kids on set giving us wonderfully creative suggestions for the stories, but I think we struggled with interpretations that were too literal and not fanciful enough.

Mark: Every time Boone made up a song on the spot while Will was there. During the Star Wars challenge, Boone’s AT-ST was crumbling in his hands in the last minutes of the challenge. I kept telling him, “you’ve got this” and he was shaking trying to get it back together in time. Then Will asked Boone for a song, I was not expecting Boone to whip out this song about the model crumbling in his hands during such a tense moment, but that is my teammate! Even Will was like, “you actually did it, you actually made up a song while you put this back together,” with like eight seconds left. That made me smile and laugh. That was one of the proudest moments for our team.

Boone: Will made me laugh over and over again. Every time we got to interact felt absolutely surreal. I have a couple Will stories that can only properly be told in person, so if you’re reading this and we run into each other at a LEGO fan event one day, remind me to tell you about them.

Did you have your finale build in mind from the beginning of the series?

Mark: No, we were so focused on the current challenge we never thought about the next one.

In the finale, you really had to respond to feedback and change direction – what was that like in the moment?

Boone: We had a couple of different ideas at the very beginning of the challenge and we hadn’t totally sold ourselves on any of the ideas we had. We were creating that protype thinking this is going to look cool, we think is going to work, but I don’t think either of us were 100% sold it was the best thing we could be doing.

Mark: We were at quite a low point after hearing that feedback, it was like one of those ‘oh we are back at the beginning and we have already lost an hour’, and Boone wrote down just a list of builds we have done in the past together at home that were so much fun to build and people love them, and it was like a reminder of what got us here. We kept the same concept but then went a completely different direction and ultimately it was just, if we are going to build a signature build that represents us, we might as well have a good time doing it. That is what we are all about, the love and creativity.

Boone: In the end, if we were going to win or lose, we knew we were going to like building something that really represented us and felt like something we would call our signature build,  regardless of whether it was for the challenge or not. We were able to leave the competition feeling really happy about what we had done. It would have been great to win, don’t get me wrong.

What were you happiest about the final build?

Mark: We had so many tiny stories happening all around that build. You could walk all around that build from any angle and there was stuff happening. I remember thinking we are creating a little world, in our little world we need to represent not just LEGO builders and their creativity but everyone that is creative, so  we went with chefs, fashion designers, artists, workers, builders and painters, all kinds of creative outlets that people use to express themselves.

Boone: Mark was primarily responsible for getting that building up in the air, I helped him with some of the lower levels, but he was doing pretty much all the architecture. There is an artform between making a building that looks like some sort of building that exists and then marrying that with what would the building look like if it was partially destroyed. And that’s not easy, but Mark does it in a way that is so natural.

At the same time I was over there working on that mechanism where you stick the paint brush in the paint can and those parts of the building move, that mechanism is something I have never built precisely before. I feel like every time we did something from a build standpoint or a technical standpoint on the show, we were always pushing ourselves beyond what we had ever done before. I was just really proud that worked. It was really pleasing when that paid off.

Mark: The food. They gave us really good food. There was a room the size of a bedroom full of good snacks!

Boone: There were so many amazing things about the show, but I’d say one I’ll miss the most is having an endless supply of building elements at my disposal.

Mark: I learned that it’s hard to come home and build without looking at the clock. I learned that builds can be more effective when you’re using more colour and telling a story. Before the show, I used mostly blacks and grey. Story and use of colours are key.

I also learned that I am a really fast builder. I can tune out the world and build with LEGO quickly. I knew that before, but Brickmaster Jamie Berard acknowledged it and that was the best compliment I’ve had. Everyone had their thing on the show and my thing was building fast and big. It’s what we said I could do when we applied, but having it acknowledged by Jamie on the show was a big deal to me.

Boone: I’ve always fancied myself a bit of an idea guy, but I’m used to being able to cultivate those ideas over time and let the really good ones come when they’re ready. This wasn’t possible on the show, so I learned to trust my gut and I learned to put my trust in Mark when I didn’t know what to do. I’ve also never really done much sculpting before the show and I had a great time sculpting creatures on a few challenges. This is definitely a skill I’d like to continue honing in the future.