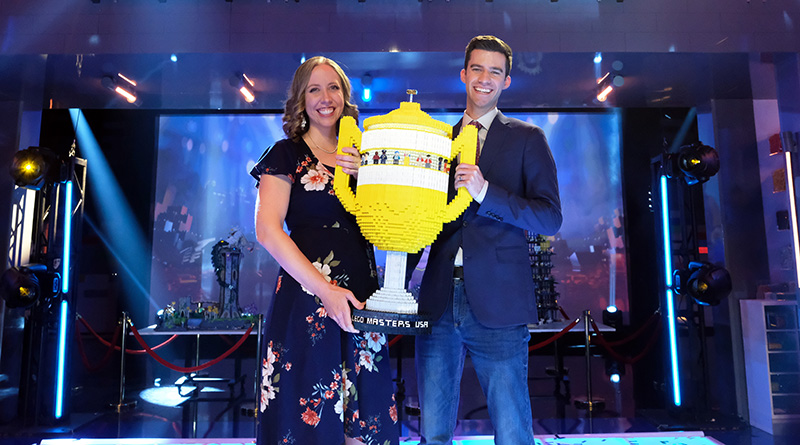 With LEGO MASTERS USA wrapped, Brick Fanatics speaks to Tyler and Amy about their incredible journey and final challenge

Tyler and Amy have pulled it off and won the first ever US edition of LEGO MASTERS USA, taking home a unique trophy and $100,000 prize. In an exclusive interview with Brick Fanatics, the married couple discuss their journey to becoming LEGO champions.

What was it like standing there, waiting for the announcement – and then hearing that you had won LEGO MASTERS?

Amy: Going into it was very nerve wracking for me, it was this huge build up, all of the work we had put into getting into the final. Standing on that stage, waiting for what the Brickmasters were going to say, my heart was pounding in my chest. I really wasn’t sure they were going to say our names, I thought it was probably going to be a different outcome and I was internally rehearsing my second place speech.

Tyler: We had psyched ourselves up not to win, so if we didn’t win hopefully it would be easier to take.

Amy: But that moment they did announce our names, it was like my heart stopped in my chest. I was pinching myself. Am I dreaming? Is this a dream? Because I have had so many LEGO MASTERS dreams.

Tyler: Certainly it was almost surreal, like this wasn’t really happening… I think people imagine or like to imagine winning some big competition – and this was actually happening.

Tyler: I was very confident in my building abilities, but building with someone else, with a time limit, is something I was less sure of.
Amy: I was not confident at all going into auditions! Being a very new member of the LEGO community, I was hoping I wouldn’t get laughed out of the room!

Tyler: Since my wife is a new builder, I put her through ‘Brick Boot Camp’. We created our own little challenges and discussed how to approach a build.

Amy: I spent as much time in our LEGO room as possible and asked lots of questions! I already had a good knowledge of the variety and range of LEGO parts, as I love sorting LEGO for Tyler when he needs his models broken down.

Tyler: Getting to walk through the doors into a room that looks like it’s made entirely out of giant LEGO bricks is incredible. The way everything was built and lit up made it a very magical experience.

Amy: Definitely a wow. I loved the clean and organised layout of the build space and brick pit.

Tyler: Time management and building with a partner are challenging. Time seems to work very differently under pressure. It can feel like an hour has gone by, when in reality, four hours have passed. Being able to estimate and manage time and stay on schedule is very tricky.

Also, working on a single build with another person who you don’t normally build with can be a challenge. You have to take into account your own projects as well as your partner’s and how the two will work cohesively in the end.

Tyler: My favourite challenge was the Space Smash challenge. I loved creating our epic alien vs hero battle and watching the slow-mo destruction.

Amy: I loved the Story Book Challenge. It was so fun to work with a group of fantastically creative kids. Their unique, ‘mind of a child’ story ideas had us laughing our heads off!

Tyler: The toughest challenge for me was the Mega City Challenge. It was hard to really get super excited about the build. It was in minifigure scale which isn’t our preference. It was also a pretty long challenge and we weren’t super excited when we found out about the twist.

Amy: The Mega City Challenge felt difficult as neither of us had much city building experience, and it is easy for buildings to be very blocky and uninspiring. It pushed us to see how we could bring visual interest and expression into our build.

Last week you built an epic LEGO Star Wars scene, the battle of Hoth. What was your process for that model?

Tyler: One of the reasons we chose that scene is it gives a very epic scene in the Star Wars series. You have a very dynamic contrast between a gigantic, almost invincible machine versus a small band of cold, frightened rebels. We really wanted to capture that scale and doing that we needed to create very large AT-AT Walkers. It was very satisfying to create those. They are not as challenging as they might look to create but I really enjoyed building them.

Amy: Part of our strategy for that was that Tyler is definitely the technical side of our design team, but then certain things needed to be duplicated so I was able to powerhouse through some of those parts to get it done in time.

How was it having actual Star Wars droids visiting the set?

Tyler: It was great to have 3PO there because he can translate what R2 and BB-8 are saying. It was so fun to have these iconic characters there and be able to interact with them in a way nobody really gets to on a regular basis. Droids are so lovable, I love R2-D2, I love BB-8… they are fantastic characters in that Star Wars universe so to be able to talk to them was really, really fun.

What was the concept behind your final build?

Tyler: One of the things that we had done prior to the show is brainstorm a bunch of different stories, or types of stories, that might be something we can apply to a challenge. One of those was the sacrifice. We wanted to showcase someone laying down their life for the good of others and another story that we had talked about is the fierce protection of a family unit, we thought this is a really strong story that pulled at your emotions, so we chose to tell that through a bit more of a fantasy story, a monster and a griffin that is protecting its young.

Amy: This of course has special significance for us now that we are expecting our first child. So that was definitely an inspiration for our final build.

Had you done that flapping motion for the griffin before?

Tyler: I have done flapping motions before that are very similar to that, so that was something going into this that if we did do a mechanical function that would be something I could fall back on, something that I already knew how to do. I did change the linkage up to get a different motion to what I had done previously, but that was a really exciting thing to pull off, it worked really well in the end.

What was the rest of the world that you came up with?

Amy: We worked hard to capture the very magical world. It is easy to fall back on what regular trees would like, so we gave everything an other worldly, fairy world twist. Lots of details, the trees with the white trunk, the colours for the sparkling water with the mermaid, the rock monsters, the dwarves – all of these elements really tied together to help create this world.

Amy: Will Arnett was always cracking us up. He’s hilarious and really lightened the mood of the entire show. Boon’s singing and Travis and Corey running together and making car noises were some other funny moments.
What have you been building in lockdown?

Tyler: One of the things that we have really enjoyed doing after each episode is building a little miniature version of each of our builds, so it has been really fun to relive building those creations but in a smaller scale, so we have been sharing them after every episode.

Amy: Tyler has also been doing a number of different building challenges for kids – or adults – and I have been taking a bit of a hiatus from LEGO building, I have been doing some sorting in the LEGO room, piano teaching as well as my career. Getting ready for baby coming has kept me busy.

Tyler: I loved doing what I love, with the woman I love. It’s so fun being challenged creatively and to be doing that alongside my creative and fun-loving wife was spectacular.

Amy: It is so satisfying to see an idea take physical form and come to life through LEGO. Also, the opportunity to have access to millions of bricks to build your idea was very exciting.

Tyler: I was encouraged to find out that my priorities are in the right place. Being on LEGO MASTERS is one of the highlights of my life. My excitement about becoming a father and embarking on that journey with my wife is so much more wonderful and exciting than being on LEGO MASTERS.

Amy: I was amazed that I was able to take the pressure and time constraints and actually use it as an asset to fuel our builds and creativity. It was a time of great personal growth and learning as a new builder. LEGO MASTERS is the ultimate brick bootcamp for a newb!