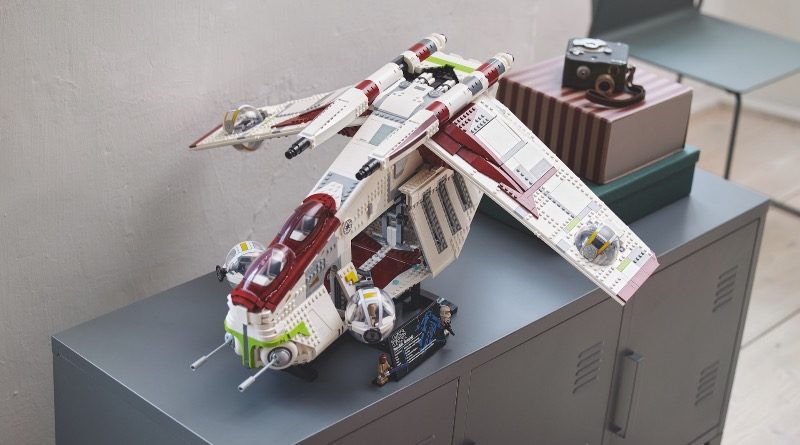 From its ‘nightmare’ design process to the other prequel trilogy set that brought it to life, here’s six things you probably didn’t know about LEGO Star Wars 75309 Republic Gunship.

Voted into reality by a whopping 30,000 Star Wars fans in last year’s LEGO Ideas poll, the latest Ultimate Collector Series set is the first to take inspiration from the prequel trilogy since 2010’s 10215 Obi-Wan’s Jedi Starfighter. It’s been a very long time coming in more ways than one, then – and now it’s here, there’s plenty to discover about this enormous ode to Episode II.

You probably already know that it’s absolutely massive, weighing in at 74cm wide from wingtip to wingtip, and that it contains 3,292 pieces and retails for £329.99 / $349.99 / €349.99. But here’s six details gleaned from our interview with the set’s designers, the instruction manual and actually assembling the model that you probably don’t know…

6 – The first batch of boxes is misprinted

Check out all the official imagery for 75309 Republic Gunship, and nothing about its packaging seems amiss. Head into a LEGO Store (or order your own copy from LEGO.com), though, and you’ll immediately notice a glaring difference on the UCS set’s box: rather than the Republic’s logo, the art features the Imperial logo.

That mistake carries over to the instructions, too, but thankfully not the sticker sheet. The LEGO Group has already acknowledged the issue and promised to fix it, but don’t expect anything to change until the first production run sells through. Current estimates place the refreshed box on shelves around late 2021/early 2022.

5 – It was a nightmare to design

Notice that gaping hole in the middle of the Gunship? Yeah, the designers did too. And for Hans Burkhard Schlömer, it meant the vehicle presented a ‘nightmare’ of a challenge to realise in LEGO bricks at this scale.

“As a LEGO designer, you have to deliver a very stable model, obviously,” he said in a roundtable interview with Brick Fanatics. “The best thing you can do is grab a big plate and start sticking [pieces on] and it’ll have a solid foundation. What you don’t want to do is build on empty air or build overhangs, and looking at this ship, it is one giant overhang.

“Structurally speaking, most of the weight is really just hanging over empty air, so it’s kind of a nightmare for a designer to deal with.”

Perhaps by virtue of that giant empty space, 75309 Republic Gunship is a surprisingly Technic-lite model – at least compared to other UCS sets. Where recent entries in the subtheme – including 75275 A-wing Starfighter and 75252 Imperial Star Destroyer – consist mostly of a frame of Technic beams surrounded by panels and sub-assemblies, 75309 Republic Gunship uses just a handful of Technic bricks.

That distinction between bricks and beams alone is enough to make it plenty sturdy, though, so while there aren’t that many Technic elements involved, it’s still just as solid (or in some cases, even more solid) than the rest of its UCS counterparts. And best of all, the weighting towards System means building it feels just like building a supersized version of the previous minifigure-scale Gunships.

3 – Another prequel set brought it to life

We have 30,000 fans to thank for giving 75309 Republic Gunship the green light, but praise should also go to an existing prequel-trilogy set for helping to determine its enormous size. 2005’s 7256 Jedi Starfighter and Vulture Droid (and by extension, all subsequent ETA-2 Jedi Interceptors) provided the perfect windshield element for the Gunship’s dual cockpits, which run down the vehicle’s forward hull.

“I realised pretty early that we could actually use what I call the ‘Jedi Starfighter windscreen’ for the cockpit area,” LEGO Star Wars Creative Lead Jens Kronvold Frederiksen explained. “Two of them, of course – one would be too small. And they were really close in the right size and scale, so all it took was some nice decoration, and we were there already. So it was quite easy.”

2 – The minifigures can fit in the cockpits

Make no mistake: 75309 Republic Gunship definitely isn’t minifigure-scale. In fact, it actually comes in roughly twice the size of a minifigure-scale version of the ship, which is no surprise given previous playset iterations already run a little large.

That doesn’t mean you can’t pop the included Clone Trooper Commander in the cockpit, though, and he actually slides in pretty perfectly. That explains why Hans proclaimed the yellow-tinted trooper technically doubles up as a Clone Pilot, then…

1 – It’s set a new record for the LEGO Group

Or, we should say, two records: not only is 75309 Republic Gunship the largest prequel-trilogy set to date, but it’s also smashed a slightly more obscure record for the LEGO Star Wars theme. As the preamble at the beginning of the set’s instruction manual reveals, it includes the highest quantity of printed windscreen elements of any LEGO Star Wars set to date.

You’ll find 10 in the box in total: two for the primary cockpits, four for the swinging ball turrets, and four more for the automated ball turrets situated on either wing. While there is a fairly extensive sticker sheet provided with 75309 Republic Gunship, none of those will need to be carefully aligned on the cockpit pieces. Phew.

75309 Republic Gunship is available to order from LEGO.com right now. For more on what to expect from this enormous set, check out our detailed review.

Consider supporting the work that Brick Fanatics does by purchasing your copy of the long-awaited UCS set through our affiliate links. Thank you!