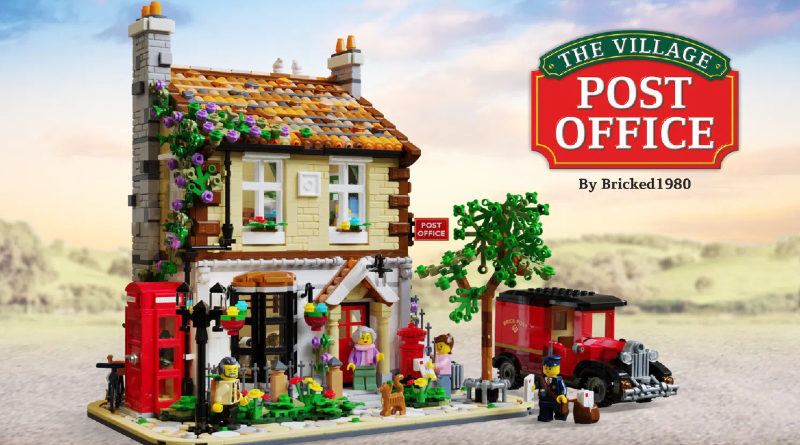 LEGO Ideas users continue to mail in their support for numerous projects as a British post office model reaches the coveted 10,000 supporters.

We really don’t envy the LEGO Ideas judges at this point as another project has reached enough support to be considered as the next LEGO Ideas set.

The project was uploaded to the platform by Bricked1980, making this their third to reach 10K, one of which is currently in consideration in a previous LEGO Ideas review round. Perhaps this member will quickly become one of the few to have two separate ideas become real LEGO sets.

Looking at the model itself, it’s immediately recognisable as part of a classic British village. Those of you in the UK might specifically spot the red phone box and postbox, not to mention the detailed cobble pavement. 2,262 pieces make up the build, which even includes an interior and a red van on the side.

Where as both of their previous proposals have more closely resembled part of the Modular Buildings Collection, The Village Post Office uses a curved outline to keep itself separate from other builds.

Four minifigures are suggested as being included in the set, one of which is of course the postman who can be seen interacting with a local cat, it’s just a shame that it’s not black and white. That’s a reference that only some of you might understand. This is the 38th project in the current round of the review stage, with the selection so far being the following:

The Village Post Office
The Office
Succulent Garden
Ancient Greek Temple
SpaceX Starship and Super Heavy (BFR)
Steampunk Airship
VIA Rail Canada – The Canadian
Marine Life
A Map of Middle-earth
My LEGO Totoro
Jazz Quartet
The Trulli of Alberobello
The Polar Express
Train Bookends
The Nightmare Before Christmas
The King’s Castle
The Sewing Workshop
Forth Bridge
A Nice Day at the Farm
The Castle of Brickwood Forest
Baba Yaga
Claus Toys
Animal Crossing: New Horizons Paradise
NASA’s SLS & Artemis
LEGO bookends
Metroid: Samus Aran’s Gunship
Hyrule Castle (The Legend of Zelda)
The Karate Kid “Wax On, Wax Off”
Scania Next Generation S730
4½-Litre 1927-31 Bentley ‘Blower’
Asterix and Obelix
The Simpsons – The Krusty Burger
The House of Chocolate
The X-Files: I Want to Believe
Castle of Lord Afol and the Black Knights
Among Us: The Skeld Detailed Map
The Office
The Shire