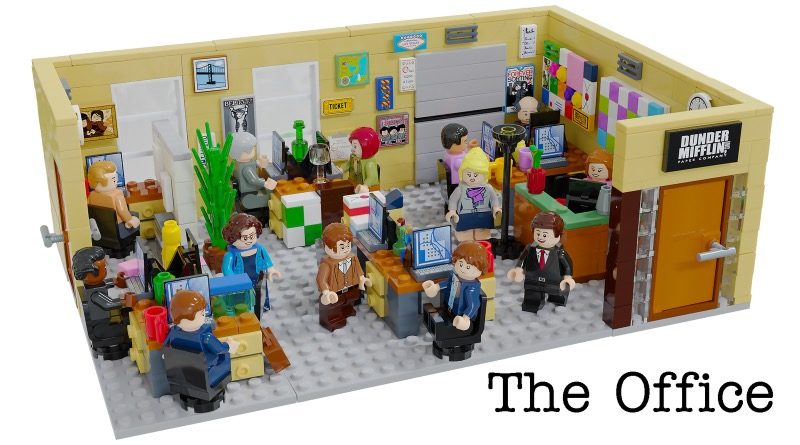 The desire to see The Office recreated in LEGO bricks has basically reached fever pitch, as yet another project based on the US sitcom has now cracked the 10K mark on LEGO Ideas.

It’s the fifth idea inspired by the antics of Dunder Mufflin to reach the review stage, and the second in this review alone – which, by the way, is still climbing exponentially. This is the 37th project in the first 2021 review, sailing past the previous record set by the second 2020 review.

SoGenius106 is the builder behind this interpretation of the beloved series, which takes a more compact approach to the familiar setting than Jaijai Lewis’s model. That’s in-keeping with the LEGO Group’s other sitcom-based sets, like 21302 The Big Bang Theory and 21319 Central Perk (and, presumably, the upcoming Seinfeld set).

That doesn’t mean it shies away from detail, though: there are plenty of deep cuts for fans of the show, right down to the smorgasbord of proposed characters. (In fact, it’s fair to assume part of the reason the LEGO Group hasn’t gone for The Office so far is the unreasonable amount of minifigures an official set would need to include.)

The Office now joins 36 other projects in contention in the first 2021 review, which means the Ideas team will have a real job on its hands whittling them down. (Design Manager Sam Johnson’s pleas haven’t gone unheard.) Here’s the full list so far:

The Office
Succulent Garden
Ancient Greek Temple
SpaceX Starship and Super Heavy (BFR)
Steampunk Airship
VIA Rail Canada – The Canadian
Marine Life
A Map of Middle-earth
My LEGO Totoro
Jazz Quartet
The Trulli of Alberobello
The Polar Express
Train Bookends
The Nightmare Before Christmas
The King’s Castle
The Sewing Workshop
Forth Bridge
A Nice Day at the Farm
The Castle of Brickwood Forest
Baba Yaga
Claus Toys
Animal Crossing: New Horizons Paradise
NASA’s SLS & Artemis
LEGO bookends
Metroid: Samus Aran’s Gunship
Hyrule Castle (The Legend of Zelda)
The Karate Kid “Wax On, Wax Off”
Scania Next Generation S730
4½-Litre 1927-31 Bentley ‘Blower’
Asterix and Obelix
The Simpsons – The Krusty Burger
The House of Chocolate
The X-Files: I Want to Believe
Castle of Lord Afol and the Black Knights
Among Us: The Skeld Detailed Map
The Office
The Shire

Get in touch with Brick Fanatics at [email protected]cs.co.uk