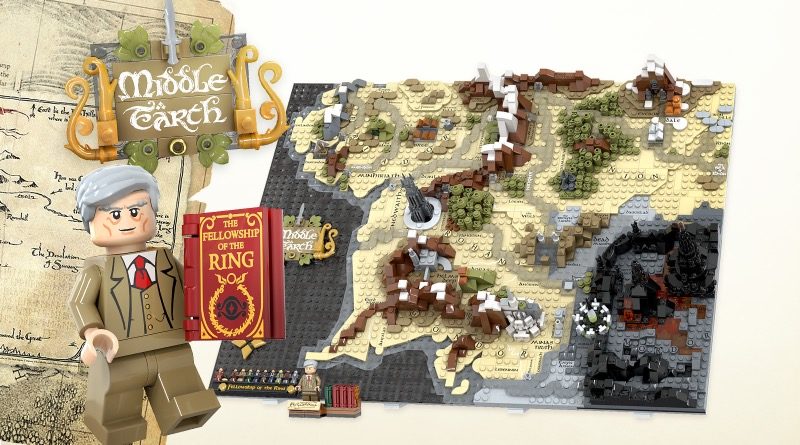 A LEGO Ideas user from Russia is attempting to bring back LEGO The Lord of the Rings with his map of Middle-earth, which has just reached 10,000 votes – and may one day become an official set.

The LEGO Group first picked up the licence for Peter Jackson’s inimitable film trilogy in 2012 alongside the release of The Hobbit: An Unexpected Journey, but then equally unexpectedly halted the brakes on the entire thing after just two years.

Fans of J.R.R. Tolkien’s works have been desperate to see the LEGO Group resume production of Lord of the Rings sets ever since, with plenty trying to make it happen through LEGO Ideas.

Artem Biziaev now joins that growing collective with his buildable map of Middle-earth, which includes microfigures of the main characters and a minifigure of Tolkien.

It’s Biziaev’s third project in the first 2021 review, which means his builds now make up 10% of all those currently up for consideration in the next qualifying round. (His first, Baba Yaga, achieved support in less than a day.)

You don’t need to be a mathemagician to figure out that that means there’s already a whopping 30 projects in this review, and there’s still nearly three months left until the qualifying window closes.

At this point, it’s hard to see how this won’t be a record-breaking review period – especially given we could blow past the previous record of 35 projects in a single review within a matter of days, based on the current rate of builds hitting 10K.

Here’s the full list of projects in the first 2021 review:

A Map of Middle-earth
My LEGO Totoro
Jazz Quartet
The Trulli of Alberobello
The Polar Express
Train Bookends
The Nightmare Before Christmas
The King’s Castle
The Sewing Workshop
Forth Bridge
A Nice Day at the Farm
The Castle of Brickwood Forest
Baba Yaga
Claus Toys
Animal Crossing: New Horizons Paradise
NASA’s SLS & Artemis
LEGO bookends
Metroid: Samus Aran’s Gunship
Hyrule Castle (The Legend of Zelda)
The Karate Kid “Wax On, Wax Off”
Scania Next Generation S730
4½-Litre 1927-31 Bentley ‘Blower’
Asterix and Obelix
The Simpsons – The Krusty Burger
The House of Chocolate
The X-Files: I Want to Believe
Castle of Lord Afol and the Black Knights
Among Us: The Skeld Detailed Map
The Office
The Shire