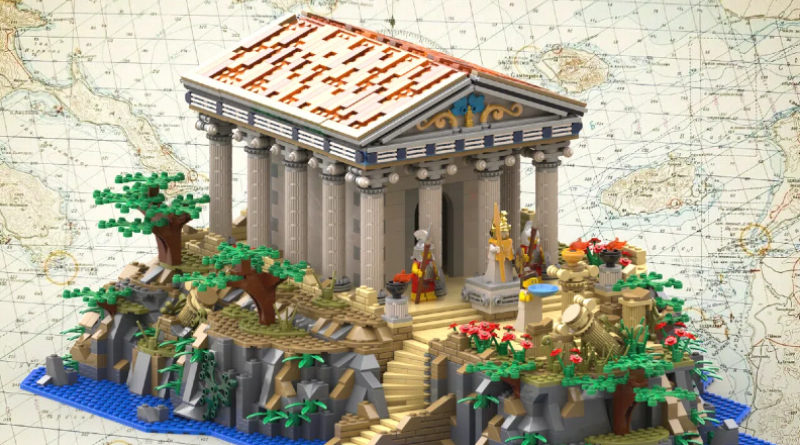 LEGO Ideas might be heading off to Greece next as yet another project manages to hit the coveted 10,000 supporters, bringing us closer and closer to a record-breaking review.

The LEGO Ideas judges are surely in for their hardest decision yet as a 35th model has drummed up enough support to be considered for production as a physical LEGO set. This time, a real-life location has inspired an idyllic island build.

HP_Brixxter is now a member of the 10K club as their latest project proposes an Ancient Greek Temple. The build sets itself apart from the other location proposals in the review by depicting the historic temple in the heyday of the Greek Empire. A pair of guards stand outside while the structure is detailed with golden elements and a statue courtyard. History buffs might be particularly interested to know that this temple is dedicated to Athena.

In the description of the project HP_Brixxter states that the target audience for the 2500-piece build would primarily be AFOLs, something that the LEGO Ideas designers might not shy away from with most of their recent releases being part of the 18+ collection. But for now, we’ll just have to wait and see if a trip to ancient Greece is in the future of LEGO Ideas.

The Ancient Greek Temple is the 35th project in the current round of the LEGO Ideas review, adding to the already massive selection of models. This also means that only one more project is needed to break the record for the biggest LEGO Ideas review, beating that of 2020’s second round. Here is the full list of every project up for consideration so far:

Ancient Greek Temple
SpaceX Starship and Super Heavy (BFR)
Steampunk Airship
VIA Rail Canada – The Canadian
Marine Life
A Map of Middle-earth
My LEGO Totoro
Jazz Quartet
The Trulli of Alberobello
The Polar Express
Train Bookends
The Nightmare Before Christmas
The King’s Castle
The Sewing Workshop
Forth Bridge
A Nice Day at the Farm
The Castle of Brickwood Forest
Baba Yaga
Claus Toys
Animal Crossing: New Horizons Paradise
NASA’s SLS & Artemis
LEGO bookends
Metroid: Samus Aran’s Gunship
Hyrule Castle (The Legend of Zelda)
The Karate Kid “Wax On, Wax Off”
Scania Next Generation S730
4½-Litre 1927-31 Bentley ‘Blower’
Asterix and Obelix
The Simpsons – The Krusty Burger
The House of Chocolate
The X-Files: I Want to Believe
Castle of Lord Afol and the Black Knights
Among Us: The Skeld Detailed Map
The Office
The Shire