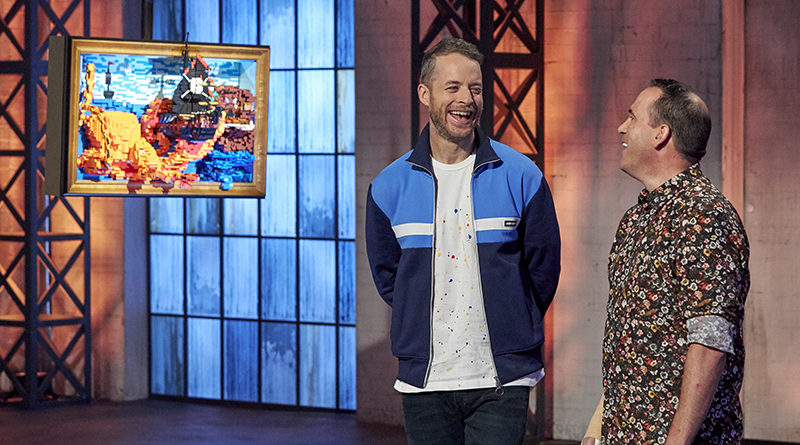 The latest challenge in LEGO MASTERS saw the teams building 3D artwork, taking a studded frame and building something beautiful that comes to life outside those boundaries. Each of the build pairs came up with a very different concept, with some proving successful and a couple not quite living up to Brickman’s exacting standards.

Compared to the last challenge, this one is relatively low key. That said, it probably only feels low key because there have been so many fun and inventive challenge concepts so far this season.

It is a little surprising how much praise Jackson and Alex get. While the forced perspective works well, their build is not packed with colour or activity. It may have looked better in person, but it is only the third of fourth best build of the episode.

Jennifer and Jodie change course part way through the challenge, switching from a jungle themed build to a kraken attacking a pirate ship. They make a decent attempt at the build, but ultimately it is not a particularly polished model, with the kraken feeling a little flat and the pirate ship slightly blocky.

Jay and Stani produce a beautiful LEGO model with an ingenious lighting effect, but come in for harsh criticism from Ryan “Brickman” McNaught as they didn’t make use of forced perspective or have many aspects of their model popping out. Andrew and Damian produce an indisputably impressive build, but also get negative feedback relating to whether their piece is ‘art’ or not (it may well be pop art, but pop art is still art).

The winners this week are Trent and Josh, who thoroughly deserve it. Their epic bull is packed with character and in the end the perfectly scale cowboy is full of life, posed as if he is about to fall from the charging beast. In this challenge they achieved the magic formula of a build that looks good for television, which always seems to work well in these competitions.

While it is subjective whether Jennifer and Jodie or Jay and Stani should have gone home based on this build, there is absolutely no chance Jennifer and Jodie will win the contest. Unfortunately their model making skills just don’t live up to the rest of the contenders, so it is a shame to see Jay and Stani go at the end of the episode. They have built some incredible creations and deserved their place in the process.