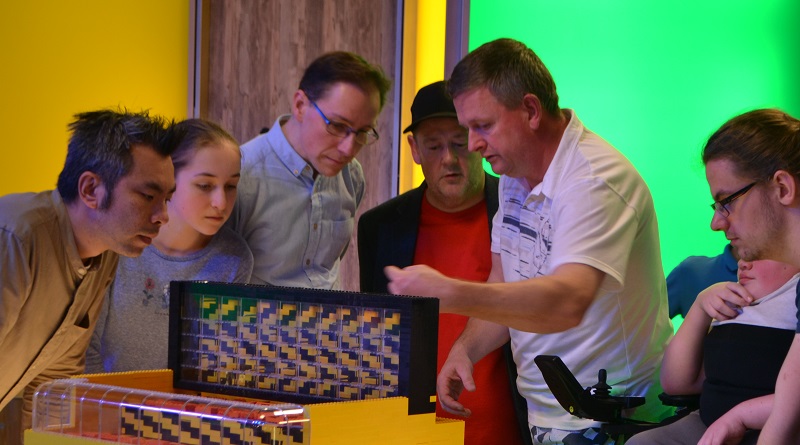 In the LEGO MASTERS Series 2 semi-final, the remaining five teams had to build a bust of a live model before producing a working arcade game

Given the incredible builds that the teams constructed for the crazy golf challenge in last week’s episode of LEGO MASTERS, it was hard to imagine how they might be surpassed in episode four. For this week’s unplanned challenge, the teams were required to sculpt a bust of comedian Johnny Vegas using LEGO bricks. When it came to the planned challenge, it was all about bringing an arcade machine to life with only LEGO elements to work with.

Paul and Lewis had a low key start in this series of LEGO MASTERS, but pulled out all of the stops last week with an impressive crazy golf hole. That trend continued with their bust of Johnny Vegas, who modelled for the teams as they built their recreations. None of the other models quite lived up to that the same standard in the unplanned challenge, but it was a particularly tricky one and it certainly looked like everyone was enjoying it.

When it came to the planned challenged, requiring the teams to construct an arcade machine, the tension in the Build Room was evident – with the complexity of the machines being attempted, there was plenty that could go wrong. Chris and Joseph achieved the best build of the week with an impressive pinball machine that dispensed minifigures, with Kato and Jayden managing to build an impressive hook-a-duck – although it was the least arcade-y of the builds.

Izzy and Stuart did not quite manage to achieve their goal, falling short of time to get their fox functioning and hedgehog rolling. Paul and Lewis managed to put together an arcade classic, but Power Functions motors could not handle their penny drop machine – thankfully they were not sent home, as the model was functioning right up until the final moment.

Although Harry and Ollie had captured the arcade brief, their finished build was a little basic, leading to the judges sending them home at the end of this semi-final. How well they took the news was impressive, a reminder of how confident they have been throughout the competition. It will be a shame for them not to be around in the final, bringing their unique insights and brand of fun to the proceedings.

Given the talent of the remaining builders, it is hard to predict who might find themselves holding the LEGO trophy at the end of next week’s final – it will certainly be a nail biter.