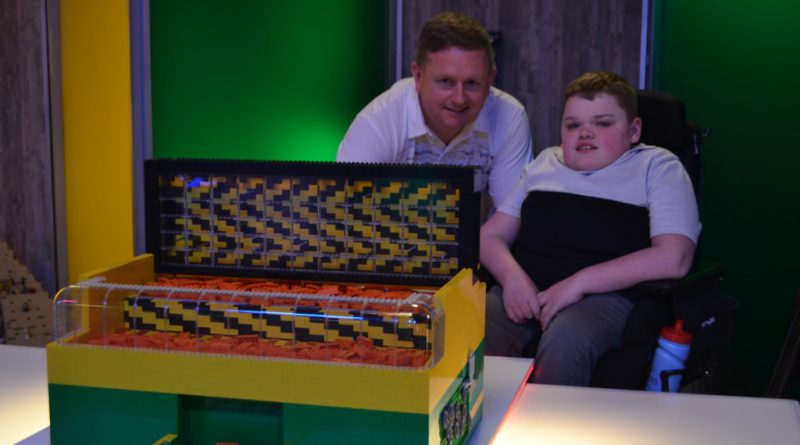 Another build pair have left the process, but was it the right decision? Two talented experts share their thoughts on which LEGO MASTERS team should have gone home this week

The LEGO MASTERS turned into an arcade for Series 2 Episode 4, as the teams put together working games for the judges to try out. Each team also had to put together a bust of comedian and LEGO fan Johnny Vegas with no prior warning.

Now that Matthew and Fran have had their say, the Brick Fanatics armchair pundits give their verdicts on whether Harry and Ollie were the right pair to be leaving contest, along with their thoughts about what the other teams produced.

I have to admit, coming into the penultimate episode of Series 2 I was a bit on the skeptical side. After last week’s questionable culling of Patric kand Catherine, I felt like perhaps the show was overly focused on maintaining a broad appeal.

I have to say though, this episode is probably my favourite of both seasons so far. Both tasks were interesting and genuinely challenging. They were also wildly different from one another in terms of goals, which made them all the more interesting to watch back to back.

It was clear most of the teams struggled with the portrait challenge, which is unsurprising as it is unlikely that most fan builders would would have any real practice with this. For me, the winners were hands down Paul and Lewis. Their tact of looking at it like a caricature was clearly the way to go – something all the more appropriate as the subject was a comedian. They were also the only team to sink the eyes into the head, which made all the difference in capturing their subject. As for the other teams, the results – while often interesting builds – were hilariously inaccurate. This isn’t to be taken as any kind of judgment, as I’m certain I would have fared no better.

The second challenge shifted the focus from form to function. In my opinion, this is perhaps the best challenge of all of them so far. The mini golf one was close, but the objectives were a bit tighter. The arcade game needed the same sort of ease of understanding for the player, but with a much more open door of interpretation. It was fun to see how totally differently each team approached the task. Chris and Joseph’s minifigure dispensing pinball machine was amazing. It was a tall order to begin with, but the fact that it worked during judging made it the pretty clear winner.

Izzy and Stuart’s labyrinth was an interesting idea, but it’s clear Stuart was too hung up on the minutia, while neither of them seemed to have tested their hedgehog on the maze at any point. Seeing Paul and Lewis’s machine fail to function during the judging was a shame, as their overall execution was great. I suppose it made for a good dramatic punctuation for the show, though.

The biggest surprise came at the end, as I was all set to call shenanigans on the judges had they not eliminated Harry and Ollie. They were fun to watch, and they should be proud of the work they’ve done on the show, but it was clear in this episode the limits of their current abilities had been met. Their “arcade” game was a big disappointment, as it was really a board game as opposed to a game of physical skill like most arcade games. So while it’s sad to see them go, they were the obvious choice. After this week, I’m very much looking forward to the final episode.

The production team at LEGO MASTERS must have been breathing a sigh of relief when Paul and Lewis’ arcade game didn’t work. Without the manufactured drama made possible by the judges being able to talk so darkly about that failure this episode would have been void of any real suspense. Inevitably, a team of two youngsters cannot win against teams with seasoned adults; Harry and Ollie’s inevitable departure was just a matter of time. Both of those kids should be super proud though, their lively imaginations got them farther than I was initially expecting, and their level of skill surprised me multiple times.

What stood out to me this episode was how much I enjoyed the challenges. The last couple of episodes have left me feeling a bit flat with the first challenge, but not this time. The task of building a bust is no easy thing and I found myself really enjoying watching how each team tackled it. Paul and Lewis’ rendition was amazing considering the time that they had to do it in; that model looked like it could have been done by a LEGO professional who does such sculptures for a living.

It was the arcade build however, which took it to a new level. For me this was the best challenge LEGO MASTERS has done in either this or its first season. Perfectly suited to the time and number of bricks available, it was a made for television task. Chris and Joseph’s pinball machine was the best build in my opinion. Such a game is an ideal subject matter, and the prize releasing mechanism was an outstanding last-minute addition. I also appreciated how the judges seem to be judging them a bit harder than say Harry and Ollie; this feels fair considering their vastly different skill levels. It was also fun to get to know Chris and Joseph a bit better with the in depth look at them; the mini miniland in their back yard was charming.

With the final teams set, there is in my mind only one surprise. I was expecting Nathan and Tom to be finalists and that they would have displaced either Stuart and Izzy or Paul and Lewis. It will be interesting to see what the final challenges are and which teams they will favour.