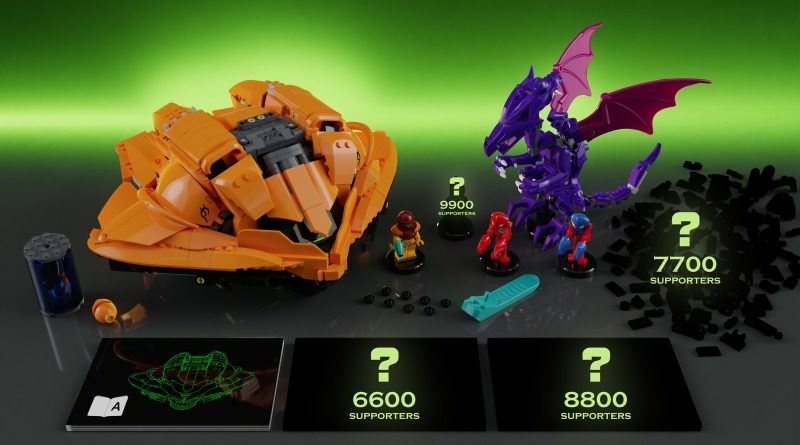 Another LEGO Ideas project based on a Nintendo property has reached the magic 10,000 votes, meaning Metroid: Samus Aran’s Gunship may one day become a real set.

Diego Maximino is hoping to bring the classic Nintendo franchise into the fold with his latest project, which will now be reviewed by the LEGO Ideas team. Its journey to 10K has been an unusual one: it took nine months to reach 4,000 votes, then rocketed to the review stage practically overnight.

That’s because the Metroid-themed build was picked up by The Verge and IGN, giving it major visibility among the wider Nintendo fanbase. While it was no doubt good news for Diego, it has interrupted his planned roll-out somewhat, with updates to the project promised at various voting milestones.

Interestingly, Diego first designed the gunship all the way back in December 2019 – months before the LEGO Group announced its partnership with Nintendo for LEGO Super Mario – and never originally planned to upload it to LEGO Ideas. Presumably he’s now happy he did, because his project could indeed one day become reality.

Metroid: Samus Aran’s Gunship is the 13th project to reach 10,000 votes in the 17 days since the first Ideas review period of 2021 began, suggesting we’re on course for another record-breaking review. 2020’s second review currently holds the record for the most number of projects in a single round at 35, but given the current window doesn’t close until May, we could surpass that very quickly.

Here’s the full list of LEGO Ideas projects currently in the running in the first 2021 review:

Metroid: Samus Aran’s Gunship
Hyrule Castle (The Legend of Zelda)
The Karate Kid “Wax On, Wax Off”
Scania Next Generation S730
4½-Litre 1927-31 Bentley ‘Blower’
Asterix and Obelix
The Simpsons – The Krusty Burger
The House of Chocolate
The X-Files: I Want to Believe
Castle of Lord Afol and the Black Knights
Among Us: The Skeld Detailed Map
The Office
The Shire

The next LEGO Ideas set will be 21325 Medieval Blacksmith. You can read our review of the castle-themed model here. 21326 Winnie the Pooh is then expected to arrive in April, with its price tag recently confirmed by a Canadian retailer.