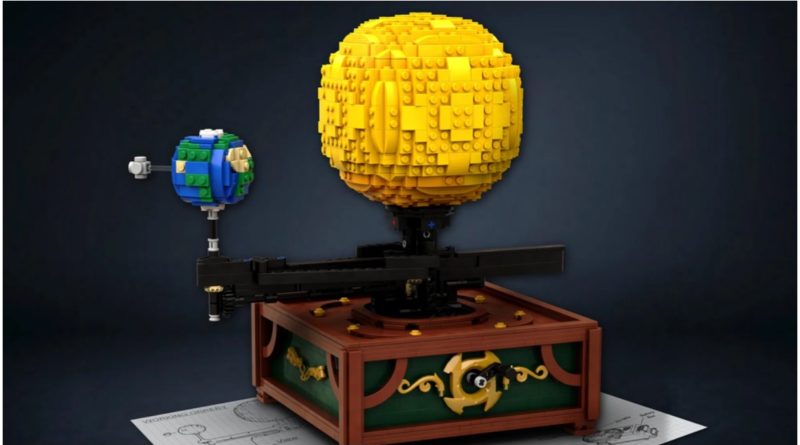 The next LEGO Ideas review will have an astronomical aspect as the Working Orrery achieves 10,000 votes.

The ninth project to reach the 10,000 vote milestone in the current LEGO Ideas phase is the Working Orrery from Lego_Monkey. The model, which displays the Earth orbiting the sun as the Moon orbits the Earth, stands on a decorative base which hides the mechanism that allows the celestial bodies to spin.

Originally powered by a motor, Lego_Monkey revised the design part way through the process and it is now turned by hand, using a crank on the side of the base. While the three bodies are, necessarily, not to scale, the brick built sun still dwarfs the Earth, while the Moon is represented by a single grey brick with 1×1 plates attached. Despite the Earth being made up of a sphere no more than about eight studs in diameter, it’s still very much recognisable as our home world.

While purists might argue that an Orrery should represent the entire solar system, there have been various versions created over the past few centuries, so it’s fair to assume that at some point a Sun/Earth/Moon version was produced.

The Orrery joins eight other sets that have made it to the next review stage, coming, as it does, hot on the heels of Medieval Alchemist which qualified just a few hours ago.

So far, the second round of LEGO Ideas 2022 consists of:

The latest LEGO Ideas set to be released is 21333 Vincent van Gogh – The Starry Night which is available from June 1, although VIP Members can purchase it now.

Help support the work that Brick Fanatics does by purchasing your LEGO sets via our affiliate links. Thanks.