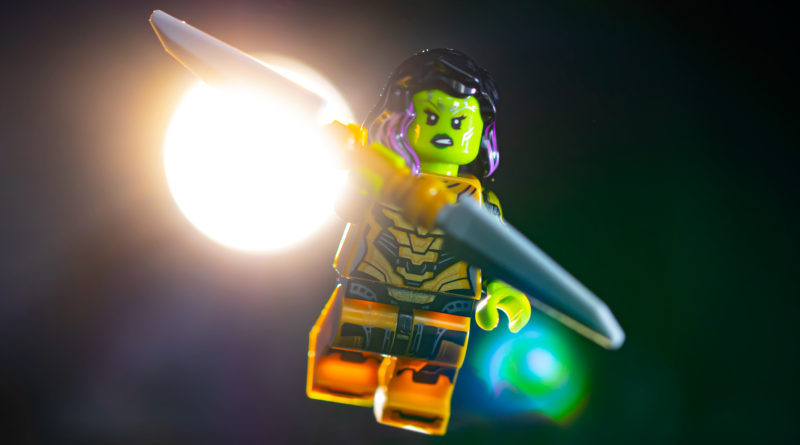 LEGO 71031 Marvel Studios is making the most dangerous woman in the galaxy more fearsome, but who is Gamora with the Blade of Thanos?

What If Gamora had never left Thanos but instead took on his role as the mad titan and warlord. that’s the question that an upcoming episode of the titular Marvel streaming series will be asking with this alternate version of Gamora if she hadn’t joined the Guardians of the Galaxy.

Whilst Gamor’s dedicated episode has yet to air as part of What If…? we can still guess how this minifigure came to be wearing the armour and how currently available instalments of the series may affect her story.

Gamora’s species was subject to Thanos’ harsh judgement when he was on his quest to balance the universe by killing half of all life within it. Before he had the Infinity Stones, this involved travelling to them and handling the situation with his various armies.

Seeing potential in the infant Gamora, Thanos adopted her as one of his own, training her to be a ruthless assassin alongside her sister Nebula. Nebula has already appeared in What if…? as part of episode two, where T’Challa Star-Lord convinced Thanos to eschew his quest, causing Nebula to find a sense of peace with her adoptive father. However, we never saw Gamora within this episode.

It may be that the upcoming episode of What If…? will showcase Gamora’s reaction to this same story, with her picking up the armour and blade that Thanos leaves behind, though that’s not been confirmed just yet.

Either way, whether Gamora will decide to pursue more than just wearing her Father’s uniform has yet to be seen, but it may be that she decides to continue his quest for balance, taking control of his various armies and the Black Order in his place. That should bring a new meaning to the most dangerous woman in the galaxy.

Gamora with the Blade of Thanos’ minifigure is as detailed as any other in the series and represents a rare appearance by the character in the Marvel theme. We’ve got a full guide explaining each of the characters in 71031 Marvel Studios for you to watch above as well as a full review of the entire series to get you ready for September 1.

Anyone hoping to get one, more, or maybe even the full cast of minifigures in 71031 Marvel Studios might want to check out our distribution guide too which will let you know exactly where you can find every minifigure in a full box.