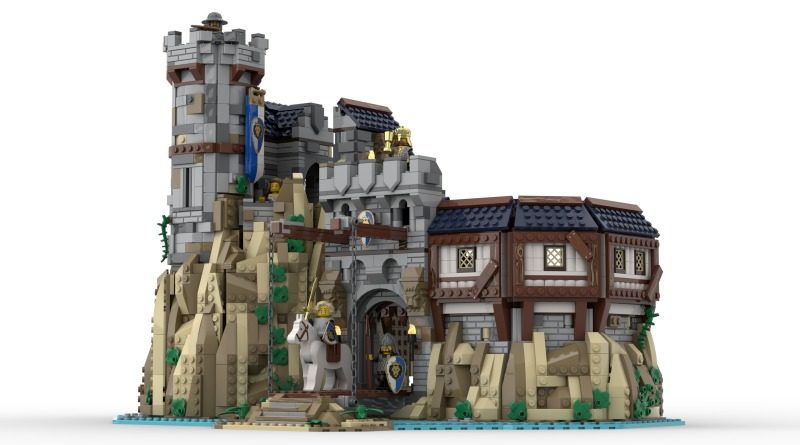 The call for the return of Classic Castle is growing ever more deafening, with yet another medieval fortress reaching 10,000 votes on LEGO Ideas.

BrickHammer’s The King’s Castle is the third project in the first 2021 review themed specifically around the Middle Ages, and the fourth to include a castle of some kind. We’re just over a month into the qualifying window for this review, which runs until May, so that’s pretty staggering.

Plus, this latest castle took less than two months to reach the required 10,000 votes to advance to the review stage. Add it all up, and the message from fans is clear: more LEGO Castle, please.

LEGO Ideas is no stranger to the classic LEGO theme, with two Black Falcons minifigures included in 21325 Medieval Blacksmith. (Find out why the designers went with that particular faction here.) But as the call for a new fortress mounts, it’ll be interesting to see whether the LEGO Group can resist delivering a real return to LEGO Castle.

BrickHammer is no stranger to LEGO Ideas, having taken two previous projects to 10K. The first, Terry Pratchett’s Discworld, was rejected in the second 2020 review, but their Viking Village still has a shot in the third 2020 review.

And even if that model doesn’t make the cut, the prolific builder will have a third opportunity with The King’s Castle, which now becomes the 23rd project in the first 2021 review. Here’s the full list:

The King’s Castle
The Sewing Workshop
Forth Bridge
A Nice Day at the Farm
The Castle of Brickwood Forest
Baba Yaga
Claus Toys
Animal Crossing: New Horizons Paradise
NASA’s SLS & Artemis
LEGO bookends
Metroid: Samus Aran’s Gunship
Hyrule Castle (The Legend of Zelda)
The Karate Kid “Wax On, Wax Off”
Scania Next Generation S730
4½-Litre 1927-31 Bentley ‘Blower’
Asterix and Obelix
The Simpsons – The Krusty Burger
The House of Chocolate
The X-Files: I Want to Believe
Castle of Lord Afol and the Black Knights
Among Us: The Skeld Detailed Map
The Office
The Shire

Frank Boor’s Classic Castle is currently under consideration by the LEGO Ideas team, so the outcome of the third 2020 review will likely give us some indication of how these latest castle-themed projects will fare. But with a Creator 3-in-1 castle rumoured to be on the way later this year, the writing may well be on the wall for all of them.