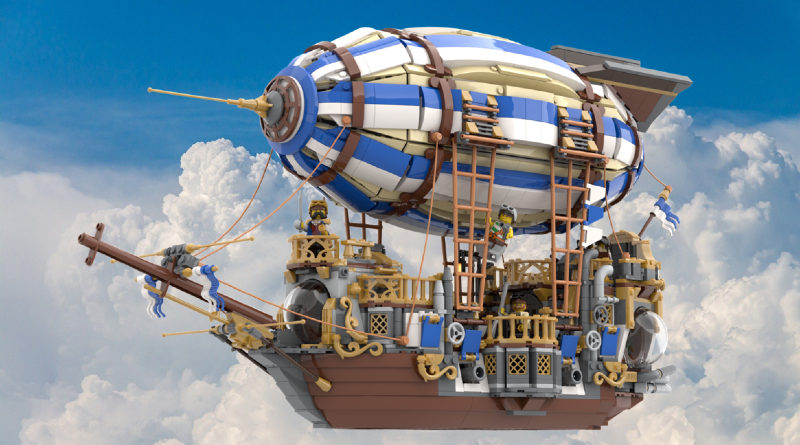 The next LEGO Ideas review round continues to grow as a steampunk airship sails to 10,000 supporters, bringing a touch of science fiction to a massive review stage.

BrickHammer continues to impress LEGO Ideas users as another of their projects has reached enough support to pass into the platform’s review stage. This is the second build of theirs to reach 10,000 supporters, with the other being The King’s Castle, another of the projects in the current round.

For the unaware, steampunk is a genre of science fiction that depicts a version of the world where the age of steam never went away, with mechanical marvels all powered by the important vapour

BrickHammer is opting for a more fantastical build this time, with the project proposing an airship taken straight from sci-fi. Golden accents and a blue and white paint job give the model a striking look, while a brown base provides some structure to the model.

An interior is also proposed with a captain’s quarters, cannons and an engine room with enough dials and levers to please any steampunk fan. The Steampunk Airship is the 33rd project in the running to become the next LEGO Ideas set. It’s safe to say that no one would envy the judges in deciding on this mammoth selection of projects. Here is every proposed model in the current round of the review stage:

Steampunk Airship
VIA Rail Canada – The Canadian
Marine Life
A Map of Middle-earth
My LEGO Totoro
Jazz Quartet
The Trulli of Alberobello
The Polar Express
Train Bookends
The Nightmare Before Christmas
The King’s Castle
The Sewing Workshop
Forth Bridge
A Nice Day at the Farm
The Castle of Brickwood Forest
Baba Yaga
Claus Toys
Animal Crossing: New Horizons Paradise
NASA’s SLS & Artemis
LEGO bookends
Metroid: Samus Aran’s Gunship
Hyrule Castle (The Legend of Zelda)
The Karate Kid “Wax On, Wax Off”
Scania Next Generation S730
4½-Litre 1927-31 Bentley ‘Blower’
Asterix and Obelix
The Simpsons – The Krusty Burger
The House of Chocolate
The X-Files: I Want to Believe
Castle of Lord Afol and the Black Knights
Among Us: The Skeld Detailed Map
The Office
The Shire