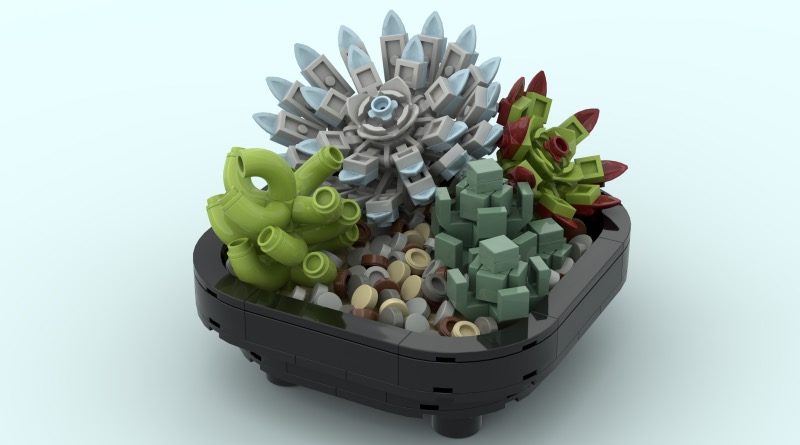 LEGO Ideas has set a new record, with an unbelievable 36 projects now joining the first 2021 review – and there’s still plenty of time for that number to increase.

It’s already one more than the previous record of 35, as set by the second 2020 review. But with this qualifying window closing in May – having been open since January 4 – we could well be looking at more than 70 projects in a single review, should the current pace of 10K projects stay consistent over the next couple of months.

The record-breaking project in question is Succulent Joe’s Succulent Garden, which has gathered the required support to advance to the review stage in a little over six weeks. Just like the LEGO Group has offered with its Botanical Collection sets 10280 Flower Bouquet and 10281 Bonsai Tree, the fan designer envisions the model as a way for novice gardeners to build a slice of plant life that won’t require any maintenance.

Their design includes four different succulent plants, neatly constructed and arranged within a small black pot. Whether the LEGO Group will consider its market niche already filled by the Botanical Collection remains to be seen, but there’s clearly a demand for a greater variety of LEGO plants from Ideas’ userbase.

The model will now advance to the review stage, joining 35 other projects currently up for consideration, and surely many more to come. Here’s the full list so far:

Succulent Garden
Ancient Greek Temple
SpaceX Starship and Super Heavy (BFR)
Steampunk Airship
VIA Rail Canada – The Canadian
Marine Life
A Map of Middle-earth
My LEGO Totoro
Jazz Quartet
The Trulli of Alberobello
The Polar Express
Train Bookends
The Nightmare Before Christmas
The King’s Castle
The Sewing Workshop
Forth Bridge
A Nice Day at the Farm
The Castle of Brickwood Forest
Baba Yaga
Claus Toys
Animal Crossing: New Horizons Paradise
NASA’s SLS & Artemis
LEGO bookends
Metroid: Samus Aran’s Gunship
Hyrule Castle (The Legend of Zelda)
The Karate Kid “Wax On, Wax Off”
Scania Next Generation S730
4½-Litre 1927-31 Bentley ‘Blower’
Asterix and Obelix
The Simpsons – The Krusty Burger
The House of Chocolate
The X-Files: I Want to Believe
Castle of Lord Afol and the Black Knights
Among Us: The Skeld Detailed Map
The Office
The Shire

Just one of the projects in the last record-breaking review was given the green light back in January, so the higher number of projects in this review doesn’t necessarily mean we’re going to see a higher volume of Ideas sets in future. But it does mean the Ideas team may have to seriously consider making changes to the way the platform operates – a possibility it’s already acknowledged.