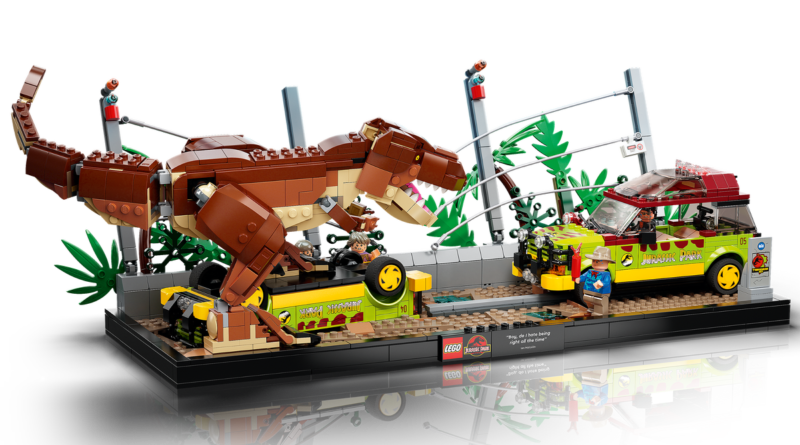 Jurassic World: Dominion’s marketing campaign kicked off last week, with a brand new trailer followed by the reveal of three new LEGO sets. Among those is 76956 T. rex Breakout, an 18+ display model inspired by the original 1993 movie – and seemingly the first in what’s rumoured to be a new series of LEGO for Adults sets.

That’s by dint of its black base and the two tiles situated front and centre, one with the LEGO and Jurassic Park logos, and the other with a classic Ian Malcolm quote: “Boy, do I hate being right all the time.” It’s a brand new approach for the LEGO Group, but it’s not a complete surprise for those of us who’ve been following the rumour mill for the past few months.

That’s because the same format is supposedly coming in two of this year’s LEGO Star Wars sets, as reported all the way back in October 2021. The first of those is apparently another minifigure-scale display piece, 75330 Yoda’s Training, which is said to depict Luke Skywalker taking a Jedi crash course on Dagobah – and include a tile with the quote: “Do, or do not – there is no try.”

The other is a miniature, brick-built recreation of the Death Star trench run from the climax of Star Wars: A New Hope, with the product number 75329. That’s thought to include tiny versions of Luke’s X-wing, Darth Vader’s TIE Advanced and two TIE Fighters, alongside a tile with the Sith Lord’s immortal line: “The Force is strong with this one.”

While that concept initially sounded alien when those rumours first surfaced, the fact that 76956 T. rex Breakout follows exactly the same style suggests they’re potentially right on the money. We won’t know for sure until the LEGO Group confirms one way or the other, so take word of those two Star Wars sets lightly for now.

Both 75329 Trench Run and 75330 Yoda’s Training are rumoured to be available from May 2022, alongside the also-rumoured Ultimate Collector Series 75341 Luke Skywalker’s Landspeeder. Click here for a full list of LEGO sets rumoured to be coming our way for the rest of this year.