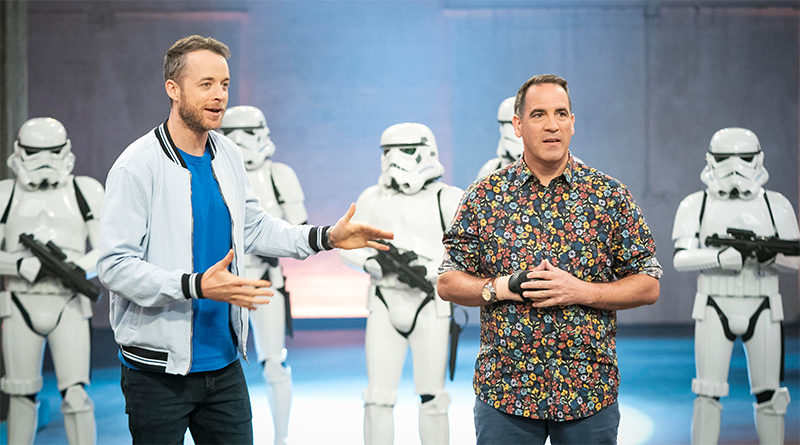 The teams travel to a galaxy far, far away for a LEGO MASTERS Australia Star Wars special

The Force is with the LEGO MASTERS team in this latest episode that sees them building ships that will fit in with the Star Wars universe. Challenged to build something in the aesthetic established by creative powerhouses like Ralph McQuarrie and Doug Chiang, the builders must ensure that these vehicles should appear to have come straight from the Star Wars galaxy.

A squad of Stormtroopers add some far, far away flair to the episode, as does a special second Build Room, packed with additional bricks and minifigures along with LEGO Star Wars sets for inspiration.

It is immediately apparent that Tim and Dannii are building to a challenging scale, which leads to their model ending up being too bulky to be quintessentially Star Wars. The concept for their dark side Jedi-hunting ship is solid, but it does not have that sleek feel that is expected from a TIE Fighter style vehicle.

Jennifer and Jodie make a good stab at this challenge, coming up with an interesting design hat feels just slightly off Star Wars (one of the things that this episode illustrates it just how hard the Star Wars aesthetic is to define). The orange and white BB-8 colour scheme works well, but the shape looks a bit odd, especially from certain angles.

Once again, Jackson and Alex produce an impressive build. It has a great shape and appropriate colour scheme, but unfortunately the wings lack the angle at the bottom and the base of the ship sits on the floor – had those two things been fixed, it would fit into the Star Wars universe perfectly.

Trent is a surrogate for the audience as he expresses his pure joy at building an original LEGO Star Wars design, but he and Josh end up building a love letter to the finest Rebel Alliance ships, mashing them up to create a fun build, but one that is a little too tank like for a starfighter. They seem to have a blast building it though, which is fundamentally what makes this show so watchable.

Andrew and Damian score a well-deserved win with their bounty hunter ship, which really does look as if it good appear in an episode of LEGO Star Wars: The Freemaker Adventures. Choice of colours, shape and a clean design make it a visually striking model, but the additional modularity and play features push it to the next level. Despite having had the golden brick in their pocket for the whole season, they have made it to the finals without using. The duo have built to a consistently high standard and deserve their spot.

As the final draws nearer, the LEGO MASTERS contest is heating up and it will be interesting to see if everything progresses as the audience has foreseen…