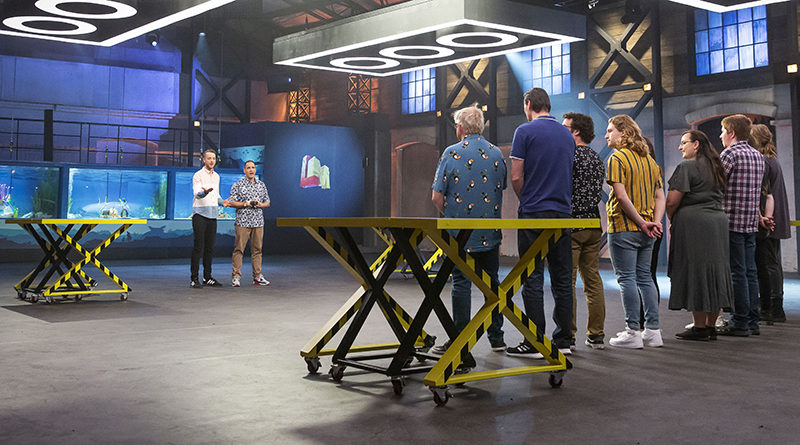 In the ninth episode of LEGO MASTERS Australia Season 2, each team must build a model that will be submerged underwater. With Andrew and Damian in the clear, only four teams are competing and one of them will be eliminated. It is quite an odd challenge – as is acknowledged during the episode, no-one knows how the LEGO elements will react underwater, which makes it more of a fan visual hook than feeling like anything the contestants can be judged on.

The highlight of the episode might be when Brickman reminisces about the days when he was Brickboy, in what might be the finest example this season of host Hamish Blake puncturing the ludicrousness of the entire enterprise. As a duo, he and Ryan McNaught continue to work together brilliantly. “Are you getting this white sausage stuff?” Blake asks the cameraman at one point.

With the build heading underwater, the teams of course start putting together underwater scenes. Tim and Dannii opt for an octopus guarding a treasure chest, with them ultimately adding a pirate to the scene – given the sometimes harsh words Brickman has had previously this year, it is surprising he lets them get away with a buccaneer under the water. It works well as a model.

It does not quite have the wow factor that Trent and Josh’s build has, with that one covering something along similar wines. A diver is heading underwater and encounters a huge squid, in what is a wonderfully composed build – by fixing the models to the handle that is going over the baseplate, they are able to use the space better than any other team.

Jackson and Alex let their imaginations run wild, taking the city of Atlantis and popping it on the back of a giant crab. It’s an excellent model, reimagining the underwater civilisation as crustacean-worshipping minifigures. A submarine even manages top float above the main scene, completing the look perfectly.

For Jennifer and Jodie, a mermaid is the way to go. In the end they opt for a menacing looking mermaid, who is a bit too blocky and does not match the quintessential image of such a character. That said, the hair floating in the water is a nice touch they manage to incorporate.

What really stands out in this episode is how well the teams get on. During production of the show, they are spending a lot of time together when they are not competing, leading to friendships being formed over the common experience. This is entirely apparent during the episode, as they check in on each other’s builds and share in-jokes. It turns out they had even joked with one another that a challenge would involve something as extreme as building underwater.

For Jennifer and Jodie, it is the end of the road, and deservedly so unfortunately. Their models do not tend to be up to the standard of their competitors, and the mermaid did not look natural enough to keep the pair in contention.