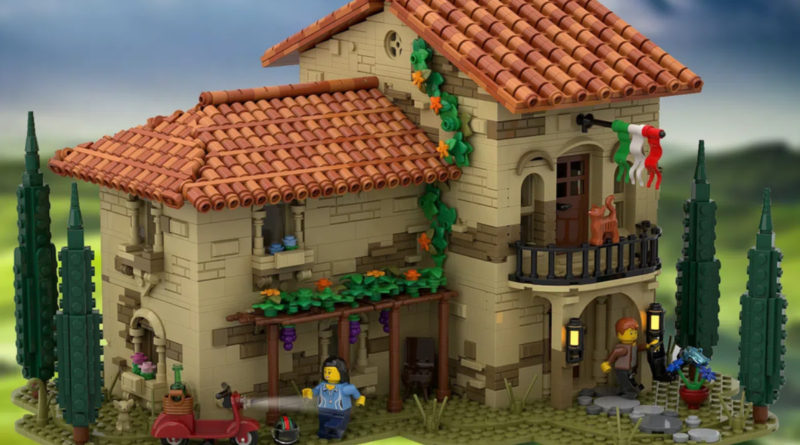 A Tuscan Villa has made it into the second 2022 LEGO Ideas review stage, offering an idyllic slice of the Italian countryside.

The set was created by LEGO Ideas user Galaxy333, offering a fully enclosed structure in a similar style to the Modular Buildings Collection. Notable features of the design include red tiling on the roof, bunches of grapes growing against one wall and intricate stone carvings on the exterior.

The inside of the house offers a living/dining area, a bedroom and a bathroom. An Italian flag flies above a balcony, and two minifigures (as well as a cat and a dog) inhabit the villa.

The design has received 10,000 votes from users on the LEGO Ideas website, which means it’s earned a spot in the second LEGO Ideas 2022 review stage. Product submissions within a LEGO Ideas review stage are subject to additional scrutiny from the LEGO Group. If the company likes the set enough (and believes it’s feasible as a LEGO set) it becomes an official LEGO set for everyone to enjoy.

However, the chance of any LEGO Ideas submission earning that privilege is slim. Although the number of sets receiving 10,000 votes (and therefore qualifying for a review stage) has increased dramatically in the last few years, only a few actually jump through the necessary hoops to become official products.

Admittedly, the LEGO Group has drawn inspiration from Italian culture on several occasions before now. 10276 Colosseum was released in 2020, and offers a lavishly-detailed reconstruction of a classic Roman landmark. Large-scale models of Italian vehicles have also been produced, in sets such as 10271 Fiat 500 and 10298 Vespa 125.

From that perspective, another Italian-inspired LEGO set seems feasible. Of course, we’ll have to wait until the conclusion of the review stage to find out for certain.

The complete list of candidates for the second LEGO Ideas 2022 review stage can be found below: