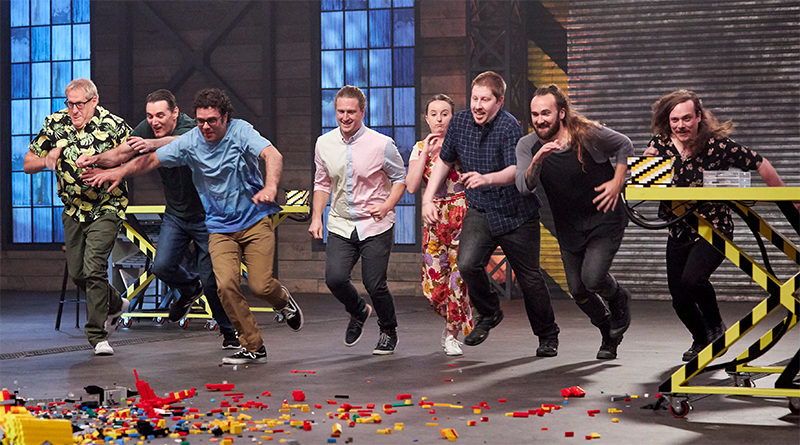 In the penultimate episode of LEGO MASTERS Australia Season 2, the teams are competing for a place in the final

With four teams remaining and only three set to make it through to the final, the stakes are high in the last episode for the LEGO MASTERS Season 2 final. As if that wasn’t enough, the four remaining teams will face two challenges – one that will give them an advantage and another that will determine if they make it through.

Mysteriously, the first challenge is introduced with a life-size Harley Davidson. It’s some classic LEGO MASTERS misdirection though, as host Hamish Blake ‘accidentally’ knocks over the model, revealing that it is a shell full of loose elements. The teams must grab what they can, then build anything they like using the parts they have acquired.

It is fascinating to see what the teams do without the resource of the Brick Pit, as it is very much like building at home with the bricks at hand. Jackson and Alex have the build that feels the most cobbled together, with their platformer model having a wonderfully messy vibe to it.

Trent and Josh pull off another character build, with a man disguised as a chicken seeking to steal eggs from a henhouse. Tim and Dannii’s phoenix feels a little off, while Andrew and Damian pull off a minotaur on top of a temple.

It’s a deserved win for Trent and Josh, with the duo promised an impressive advantage in the elimination challenge. As usual, the advantage isn’t that great, as they get to choose one of four themed lots to add to a LEGO city layout, as well as selecting lots for their opponents. The catch is that the build has to have distinctive night and day aspects, with the nigh version accentuated with lights.

Jackson and Alex get the commercial zone and go straight into building a ridiculously tall tower, as the headquarters of some corporate bad guy. Their night aspect reveals that an accident in a lab means things are going wrong for the nefarious organisation, hence the police and secret agents becoming involved.

Despite having the advantage, Trent and Josh struggle to get very impressive buildings up in time while also spending too long on a mechanism they don’t get to work. That said, the spooky elements of their builds come to life well with the addition of light.

Andrew and Damian pull off another cool build, with an art gallery opening taking place at the same time it is being robbed. Their use of light is really impressive, although all of the elements are visible both in day and night mode — making it hard to understand exactly what the challenge was here.

Opting for the most ambitious build are Tim and Dannii, who plan for a UFO lifting through a warehouse roof. Not only does their spacecraft fail to work, but their model is quite blocky – their truck and entrances really aren’t up to final week standard. It’s a shame, as some of their models have really wowed.

One thing that is really nice about LEGO MASTERS is that when it is clear which team will be going home, the decision is just declared, with no added drama. Both this time, and in the episode when Summer and Iona went home, Brickman simply explained why the team was going home.

Andrew and Damian and Jackson and Alex are two consistent pairs of builders. Trent and Josh are inconsistent, but often pull something spectacular out of the bag. With one episode to go, this season is anyone’s for the taking…