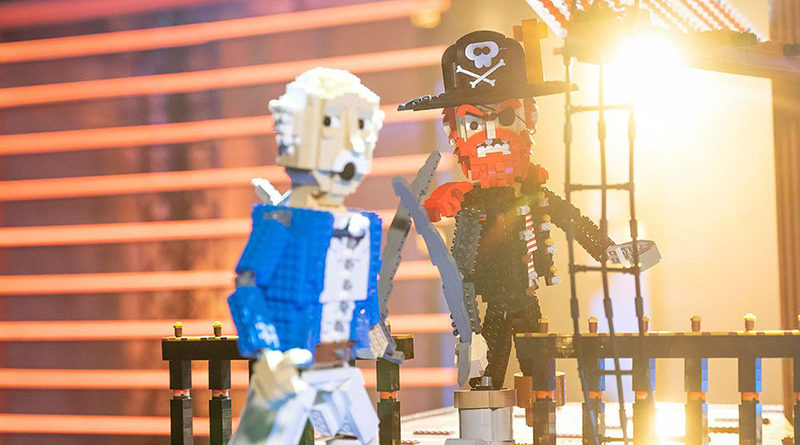 In the final episode of LEGO MASTERS Season 2, three extremely proficient teams go up against each other to build anything they want. With a critical 28 hours to produce a build that will wow both the general public and Ryan “Brickman” McNaught, any of the three teams are capable of winning this year’s trophy and becoming LEGO MASTERS.

It is worth saying again that there is the risk that watching people with LEGO bricks can get boring – and it feels like the US edition of the show was nervous of this. What this series has demonstrated again this second season is that seeing people build things, watching them problem solve, understanding why they adapt designs is actually where the drama is.

This final episode demonstrates that more than ever, and a 90 minute cut of it would have been welcome. Seeing these six people give it their all, first coming up with a design then figuring out how to execute it in the allotted time is presented in an incredibly exciting way. It helps that all of the teams are likable people and the way they interact with their ‘opponents’ demonstrates that while winning may matter, they appreciate one another as people and builders.

Each of the builds is incredibly impressive, making the choice of winner hard to gauge. Did Jackson and Alex deserve the trophy and title of LEGO MASTERS Australia 2020 (not to mention $100,000)? Their builds was a little scrappy in places, but overall an incredibly atmospheric scene straight out of gothic literature, as the steampunk robot escaped rom beneath san old mansion to terrorise the townsfolk.

Andrew and Damian’s model was very, very specific in the subject matter, but was ridiculously polished given the time constraint. While McNaught’s comment about the mech’s pose was fair, very other aspect of the build was completed to an exceptional standard. The mechs were excellent, the setting was excellent and the world building was ingenious.

It is hard not to want to give Trent and Josh extra points just for going for classic Pirates, recreating Redbeard as a huge figure. The timing of their creation feels perfect, following hot on the heels of LEGO Ideas 21322 Pirates of Barracuda Bay. The fact that they achieve the scale they do in the timeframe, with some of the ingenious techniques such as the sideways decking and curved sail, is amazing. While there are niggles – the anchor flag ae not at the correct scale, the deck is uncluttered – to build something so large so quickly deserves props.

It cannot have been an easy decision for Brickman to make, and one flaw for this year was not bringing in a co-judge to help make the decision. Something about bringing in the LEGO Group’s Fenella Blaize-Charity in the Season 1 finale made the decision feel a little more transparent. That said, any of the three would have been worthy winners and Jackson and Alex have built some amazing models throughout the season.

Of the LEGO MASTERS formats in the English language, Australia remains the best. Hamish Blake’s hosting, Ryan McNaught’s helpful yet firm advice, fiendishly fun challenges and genuinely high calibre contestants make it an enormously watchable show. It is a great job by everyone involved in the production and of course those LEGO fans who are brave enough to put themselves out there to appear.