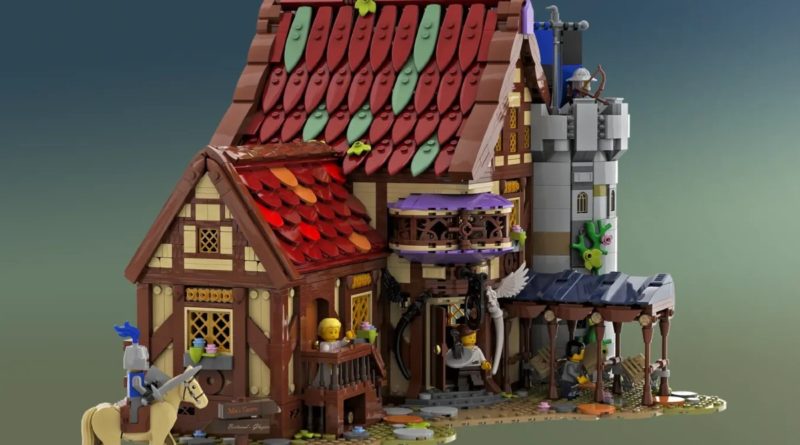 Inspired by a LEGO Castle model, a medieval guarded inn has reached 10,000 supporters on LEGO Ideas, passing it into the second 2022 review.

LEGO Ideas user xXgGhostXx now has another model in a review round following their Castle Outpost project, which is currently under review by the platform’s team. Their latest build to reach a review round is the Medieval Guarded Inn, featuring two floors of fully-furnished interiors and details.

A short story for this location has also been conceived by the fan designer, tying into the Black Falcons. The description also notes that this was inspired by 6067 Guarded Inn from 1986, which also featured a stone tower on the building.

The overall design of this build is similar to 21325 Medieval Blacksmith and it would fit well alongside it should it be picked for a future set as part of the second 2022 review. As an inn, patrons can enjoy the bar for food and drinks downstairs, before settling into the two rooms upstairs while their horses stay safe outside in the stable. The guard tower makes sure that the inn remains safe at the request of the Black Falcons too.

This is the 21st project in the second 2022 LEGO Ideas review, and you can see what other buids have made it into the round by clicking on the links below: