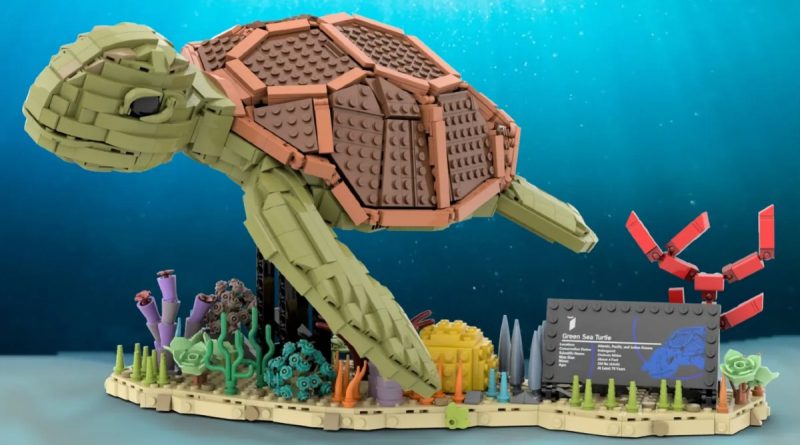 The latest LEGO Ideas 10K project combines the Star Wars Ultimate Collector Series format with a sea turtle – and the results are most impressive.

Ideas user LEGOverwatch’s Sea Turtle sits on a seabed stand adorned with a plaque inspired by the LEGO Star Wars UCS sets, which includes details like the reptile’s conservation status, scientific name, maximum size and age. Designed in BrickLink Studio, the build consists of 1,744 pieces and a custom sticker for the information plaque.

“I have always loved turtles, they are such amazing animals and I really wanted to make one,” LEGOverwatch explains on the project page. “The shell of the turtle was really hard to make. I tried to match the turtle shell to the ones I saw in the images and had to find all the proportions of the shell and calculate the angle to make the turtle work.

“It took a lot of time, but I think it turned out pretty good! The rest of the turtle is made with slope curves to make it a smooth, round effect. The bottom of the turtle has a small hole to connect the turtle to the stand.”

The turtle joins 41 other projects in the second 2022 review, which means its fate now lies in the hands of the LEGO Ideas review board. If they choose to give it the green light, you’ll one day be able to buy your own version of LEGOverwatch’s Sea Turtle from the LEGO Store.

With the addition of the sea turtle, we’re now just 16 submissions away from a new record for the most builds in a single round. The qualifying period for this review phase is open for another few weeks yet, so there’s every chance it could happen. Here’s the full list of LEGO Ideas projects in this round: