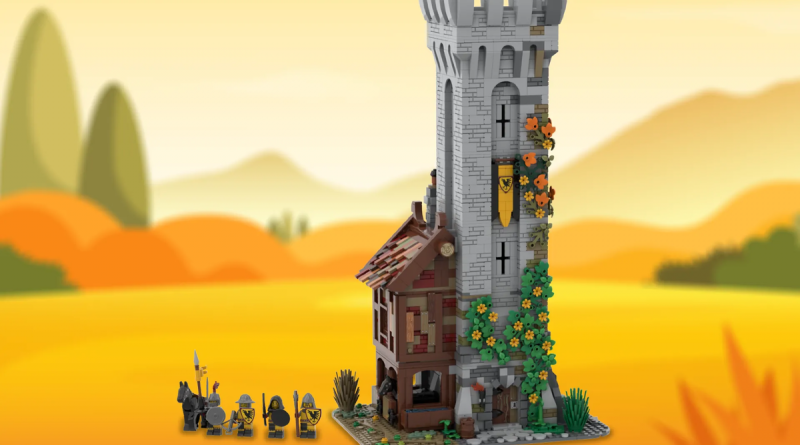 A large medieval LEGO set has a shot at official set-hood, after gaining 10,000 votes on the LEGO Ideas website.

The model (which was designed by LEGO Ideas user PeterKeith) takes its cues from the world of swords and sorcery. Unlike most LEGO Castle sets it’s unusually tall and narrow – as befitting a medieval watchtower, we suppose.

However, the interior is surprisingly accessible. Like sets in the Modular Buildings Collection, sections of the tower can be detached to look inside the set. The inside of the tower contains storage areas, what seems to be a bedroom, and (of course) a lookout post atop it. There’s also a small stable and a water trough outside it, with space for two horses.

Interestingly, the tower isn’t staffed by the Lion Knights or Black Falcons we’re used to seeing. The tower’s staff use the outfit and accessories from the Tournament Knight, who appeared in the Collectible Minifigures line back in 2020. We’re not sure if that aspect would survive to an official set.

In any case, the set seems to have struck a chord with LEGO Ideas fans. Since it’s gained 10,000 votes the set now enters the second 2022 Review Stage. This means it’ll be examined by the LEGO Group and (if it ticks all the necessary boxes) become an official set for everyone to buy.

You can check out the complete list of candidates in this review stage below: