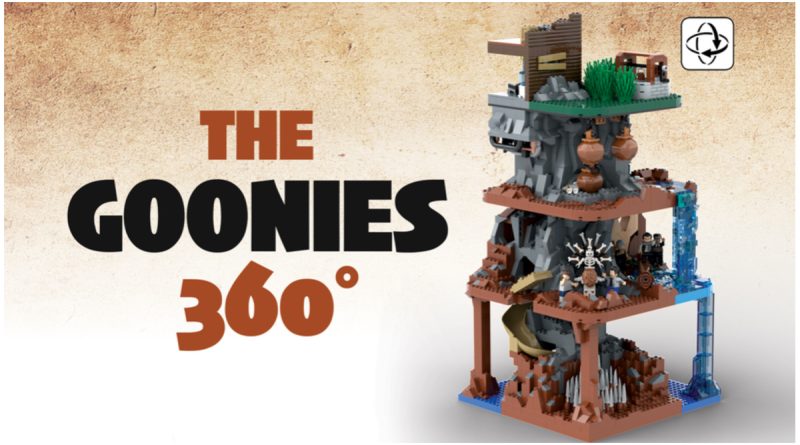 Get ready to do the Truffle Shuffle as a design based on the classic eighties movie, the Goonies, reaches 10k votes on LEGO Ideas.

Depending on your age, movies in the eighties were either the greatest thing ever, or cheesy enough to give you cholesterol poisoning. For those who love the decade that gave us big hair, big shoulder pads and more synthesised music than you could shake a pastel coloured stick at, LEGO Ideas has already delivered.

21108 Ghostbusters Ecto-1 and  21103 The DeLorean Time Machine are taken from two of the biggest eighties movies. We could probably make an argument for 21314 Tron: Legacy to be included too, as the follow up wouldn’t exist without the 1982 original. Now they may be joined by a set from another iconic film from that decade, The Goonies.

The Goonies 360 is a rotating montage design created by LEGO Ideas user SaladBricks. The set consists of ten locations from the film, built across four levels, allowing builders to follow the gang as they attempt to locate One-Eyed Willy’s lagoon, while pursued by the local crime family, the Fratelli’s.

SaladBricks tried many different styles of build before settling on a vertical design. On the submission page, they said: “This set was a challenge to build and it took on many variations along the way, from a super-wide diorama, to an “ant farm” type of setup, while finally settling into this 360° tower of 80’s awesomeness.”

The Goonies 360 become the 49th set to qualify for the Autumn Ideas review. You can see the full list of designs that have received 10,000 votes of support in the list below.